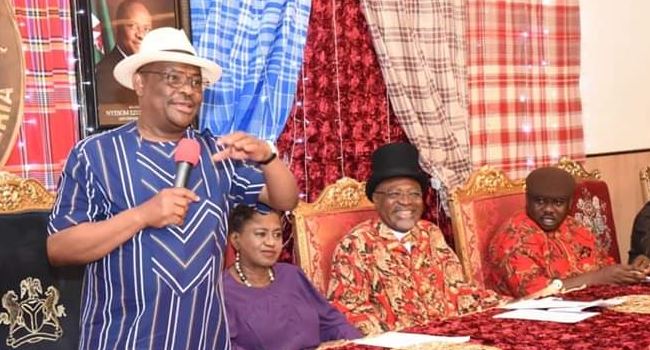 The Governor of Rivers State, Nyesom Wike, has declared that it is unfortunate that after years of practicing democracy, Nigeria which is often times described as the giant of Africa, cannot conduct credible elections.

Speaking on Friday at the Government House Port Harcourt during a solidarity visit by the leaders and people of Okrika and Ogu/Bolo Local Government Areas, Wike said that the inability to conduct credible elections is quite unfortunate.

He said; “It is unfortunate that up till now, we cannot conduct free and fair elections in Nigeria.

“It is unfortunate that the giant of Africa lacks the capacity to conduct credible elections.”

While commending the Wakirike women for defending the Rivers mandate against the invading soldiers, Governor Wike urged Rivers people to always ensure that their votes count during elections.

“At all times, continue to defend and protect the Rivers mandate”, he said.

Wike’s comments comes days after he advised the Federal Government led by President Muhammadu Buhari to warn the national chairman of the All Progressives Congress (APC), Comrade Adams Oshiomhole from making remarks that could destabilise Nigeria.

Wike made the call in a statement issued by his media aide, Simeon Nwakaudu, while reacting to Oshiomhole’s comment that no governor would be sworn in, in Bayelsa State, following the sacking of David Lyon of the All Progressives Congress.

Reacting further, Wike in the statement called on Oshiomhole to desist from making inflammatory remarks adding that what he is doing in Edo State is not proper and he should not bring it to the rest of the Niger Delta.