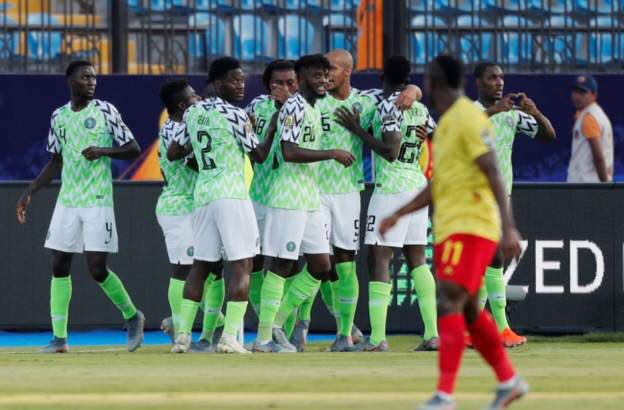 Nigeria’s Super Eagles have advanced to the quarterfinals of the ongoing Africa Cup of Nations (AFCON) after beating defending champions Cameroon in last 16.

Three-time champions Nigeria faced a thrilling challenge from the Indomitable Lions but successfully scaled through with a 3-2 scoreline at the Alexandria Stadium in Egypt.

Nigeria, having played in the same Stadium since matchday one, felt at home and reacted well to the fight-back from their opponents to set up a quarterfinal clash with either hosts Egypt or rivals South Africa.

The Eagles started well and deservedly went ahead in the 19th minute after Odion Ighalo’s shot deflected into the net.

Cameroon did not stop pressing for a goal as they maintained a greater possession of the ball and equalised in the 41st minute through a square pass finished off by Stephane Bahoken.

Read Also: Nigeria Vs Cameroon: 3 things to expect from the AFCON knockout clash

The defending champions were not done for the half as Clinton Njie took advantage of a blunder to get a second for his side a minute before halftime.

Hopes were not lost for Gernot Rohr’s men as they returned from the break to stun the title holders with two goals between the 63rd minute and the 66th.

Ighalo leveled with a quality goal from a defensive blunder by Cameroon, before Alex Iwobi fired in an excellent winner to send Nigeria to last eight.

Iwobi found himself at the positive end of swift passing game involving Ahmed Musa, Odion Ighalo and Oghenekaro Etebo and made no mistake in finishing off against Clarence Seedorf’s men.

Another round of 16 match is set to kickoff later on Saturday, between hosts Egypt and South Africa.

The winners of the tie will face the Super Eagles of Nigeria in the quarterfinals of the competition.