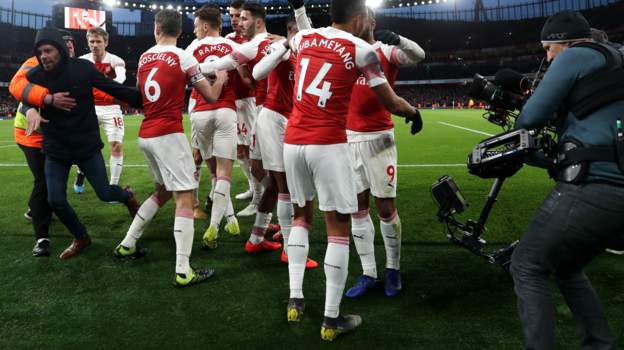 Super Eagles forward, Alex Iwobi played as a late substitute in Arsenal’s 2-0 victory over Manchester United at the Emirates on Sunday.

The defeat was Manchester United’s first Premier League defeat since the arrival of Ole Gunnar Solskjaer as interim manager.

Iwobi replaced Mesut Ozil in the 77th minute when the Gunners were already two-goals up and made some impacts upfront.

Granit Xhaka had beaten David de Gea with a swerving shot in the 12th minute, before Pierre-Emerick Aubameyang made it two for Arsenal from the spot.

With the goal, Aubameyang became the first player since Alexis Sanchez to reach 20 goals in a single campaign for Arsenal.

The Gunners have now leapfrogged the Red Devils to move into the top four.

Unai Emery’s men have won seven out of 10 top-flight games in 2019 and are one point behind north London rivals Tottenham, who sit third in the table, with eight games remaining.

Related Topics:Alex IwobiarsenalManchester United
Up Next

Hazard rescues point for Chelsea with late equaliser against Wolves