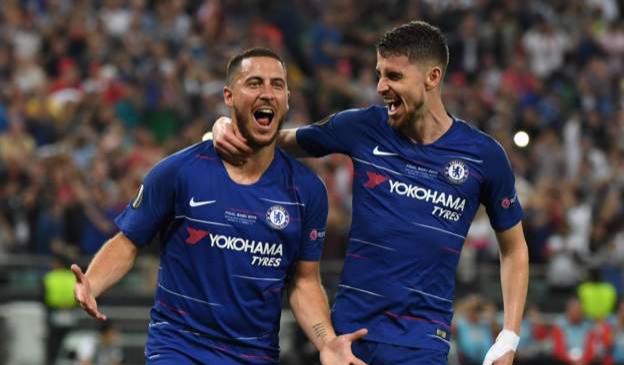 Alex Iwobi’s goal was not enough for Arsenal as Eden Hazard’s brace helped Chelsea win the all-English Europa League final against Arsenal at the Olympic Stadium, Baku on Wednesday night.

Chelsea thrashed Arsenal 4-1, with all goals coming inside a thrilling second half.

After a goalless first half, the Blues piled up pressure and deservedly went ahead early in the second half through an Olivier Giroud header.

The goal came in the 49th minute when Emerson hit a flat cross from the left and Giroud gets across his defender to send in a flying, thumping header past Petr Cech.

On the hour mark, Pedro doubled the lead for Chelsea, who stepped up the play against their Premier League and city rivals.

Eden Hazard then made it 3-0 when he sent Cech the wrong way from the spot, but Iwobi came off the bench and pulled one back for Arsenal, before Hazard scored again on 71 minutes.

For Chelsea boss, Maurizio Sarri, the triumph is his first major trophy in his managerial career.

And the loss for Arsenal means they won’t play in the Champions League next season, as they also did not finish in the top four of the Premier League.

Afyer the game, Hazard gave a hint of him leaving Stamford Bridge this summer.

He said: I have made my decision already and now I’m waiting on both clubs. I think it is a goodbye, but in football you never know.

“My dream was to play in the Premier League and I have done that for one of the biggest clubs so maybe now it is the time for a new challenge.”

Hazard is said to be moving over to Spanish side, Real Madrid.