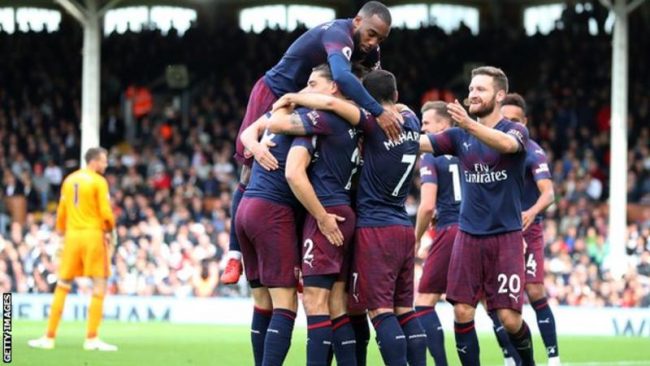 Super Eagles forward, Alex Iwobi was in action for Arsenal as they secured a 9th consecutive victory with a 5-1 win over Fulham in a Premier League clash on Sunday.

Fulham had leveled before the break as Luciano Vietto pounced on a loose pass by Nacho Monreal after Lacazette opened the scoring early in the first half.

The goals then started flooding in in the second half as Lacazette added his second, which was followed by Ramsey’s before Aubameyang completed the rout with a brace.

The win meant a sixth consecutive Premier League victory for Arsenal, as the Unai Emery’s men climb up to third in the table, a point behind Manchester City and Liverpool, who meet at Anfield later on Sunday.

Fulham remain just above the relegation zone in 17th.