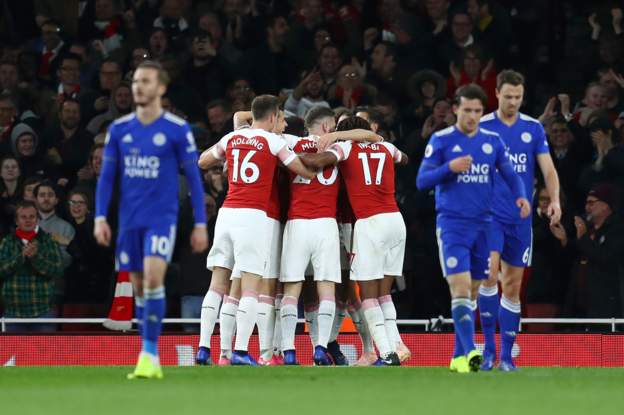 Super Eagles star, Alex Iwobi put up a brilliant performance for Arsenal as the Gunners come from behind to beat Leicester City 3-1 at the Emirates Stadium on Monday night.

Iwobi, who played from the start to finish of the game, was awarded the man of the match for his showing against Leicester, who had compatriots Kelechi Iheanacho and Wilfred Ndidi.

A brace by Gabonese striker, Pierre-Emerick Aubameyang sealed a 10th consecutive win for the Unai Emery side after a Mesut Ozil goal cancelled a Hector Bellerin own goal that gave the visitors the lead early on.

It’s the first time since 2007 that Arsenal have earned 10 straight wins, and Leicester have not won at Arsenal in 21 top-flight games since 1973.

Speaking after the game, coach Emery said: “Different halves. every match is difficult. First half we didn’t control the match with possession and positioning.

“We are happy because we are progressing. We need to play with organisation but also with heart.

“We are beginning to play with heart.

“When you continue to improve your demands are very high. We need to control the matches more than we are doing now. First half we didn’t play well but then we played with quality and heart. This feeling together is very good.

“We need the number 10 position sometimes with Mesut Ozil and sometimes with Aaron Ramsey. We can’t play with both sometimes. Last match was away and we played it with two strikers. Today Mesut was very good but I believe in every player and different positions for the players.”