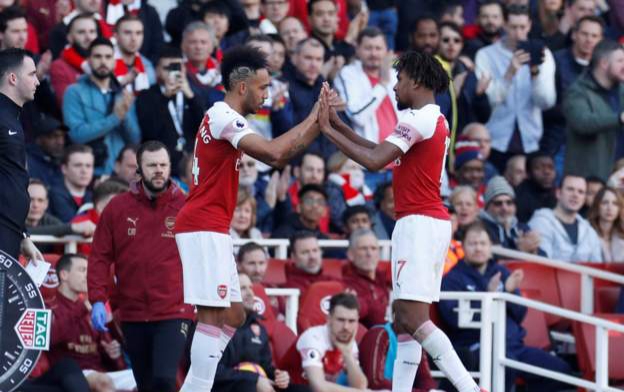 Super Eagles forward, Alex Iwobi was in action for Arsenal in their 2-0 victory over Southampton in a Premier League clash at the Emirates on Sunday.

Iwobi was on play for 75 minutes after which he gave way for Pierre-Emerick Aubameyang.

The Gunners punished struggling Southampton with two first-half goals to move back into the top four of the league table.

Arsenal got into the lead in the 6th minute when Alexandre Lacazette turned in Henrikh Mkhitaryan’s shot.

They doubled their lead shortly after when Ieobi’s deflected shot found Mkhitaryan who drilled a shot into the net on 17 minutes.

Southampton did miss good chances as they remain in the bottom three after failing to win for a fourth successive league game.

The other Premier League clash played concurrently between Manchester and Liverpool at Old Trafford ended goalless.

Liverpool got the point they needed to return to the top of the Premier League but were left frustrated by their failure to use their advantage.

The Red Devils were ravaged by injuries during the match, with three midfielders forcing the hosts to use all of their substitutes in a bizarre 25-minute period before half-time.

United drop to fifth place, with Arsenal leap-frogging them with their win over Southampton.

Ndidi, Iheanacho to get new boss as Leicester ‘part company’ with Puel