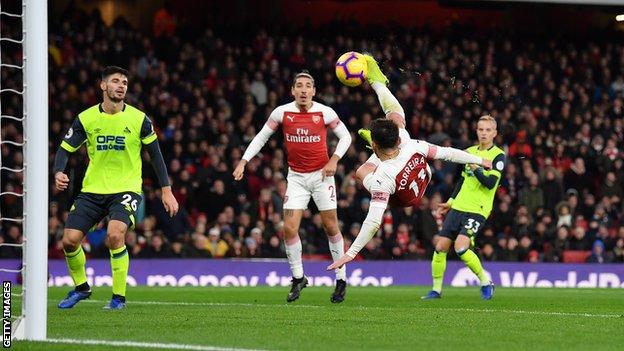 Super Eagles forward, Alex Iwobi was subbed on for Arsenal in their 1-0 win over Huddersfield in a Premier League action at the Emirates on Saturday.

Iwobi was brought on from the bench at half time to replace Lichtsteiner after a goalless first half.

The Gunners were able to carry the day after a late winner by Lucas Torreira who scored a sublime bicycle kick in the 83rd minute to earn the host all three points.

It was Pierre-Emerick Aubameyang who found room at the back post and chipped across the six-yard box for Torreira to acrobatically volley in.

Super Eagles defender, Leon Balogun made a full appearance for Brighton who lost 1-0 at Burnley.

At Old Trafford, Manchester United recorded their biggest Premier League win of the season as they swept aside Fulham.

The hosts took the lead after 13 minutes when Ashley Young opened the scoring.

Marcus Rashford then set up Juan Mata for their second, before Romelu Lukaku finished from close range from Mata’s low cross.

Substitute Aboubakar Kamara pulled one back for Fulham with a penalty after he had been fouled by Ander Herrera.

But the Claudio Ranieri side were soon reduced to 10 men when Andre-Frank Zambo Anguissa was dismissed, and Rashford sealed the win for the Red Devils with a powerful strike.