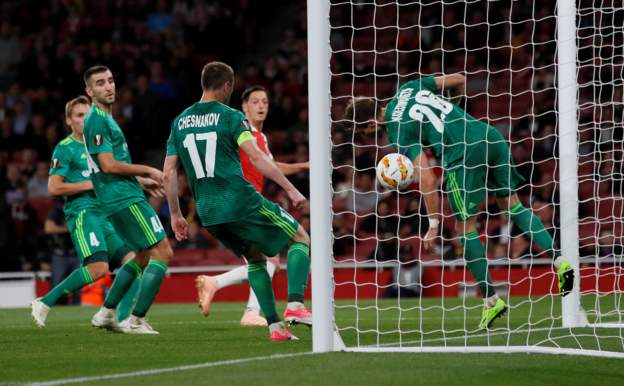 Super Eagles forward, Alex Iwobi was on from the start for Arsenal and provided an assist as the Gunners kicked off their Europa League campaign with a 4-2 win over Vorskla Poltava.

The game, played at the Emirates Stadium, saw Gabonese striker Pierre-Emerick Aubameyang score a brace while Mesut Ozil and Danny Welbeck scored the other goals for Arsenal.

But the visitors were able to snatch two away goals towards the end of the game through Vladimir Chesnakov in the 76th minute and Vyacheslav Sharpar in the 94th.

In the other group E game, Portuguese side, Sporting CP defeated Qarabag FK 2-0 to move second in the standings.

Willian scored the only goal of the game and it was enough for Chelsea to beat their hosts and maintain their winning start to the season.

The other Group L clash between MOL Vidi and BATE Borisov ended in favour of the latter, who won 2-0 away.

Elsewhere, Super Eagles midfielder, Uche Agbo came in as a substitute for Belgian outfit, Standard Liege who fell to a 5-1 away defeat to Sevilla at the Estadio Ramón Sánchez Pizjuán, Sevilla.

Also in Spain, former U-23 Eagles striker, Sadiq Umar was an unused substitute in Scottish side, Glasgow Rangers, who drew 2-2 with Villarreal.

Samuel Kalu made his debut in the Europa League for Bordeaux who lost 1-0 at Slavia Prague, while Stephen Odey, also making his debut in the competition, won with 10-man FC Zurich 1-0 over AEK Larnaca.