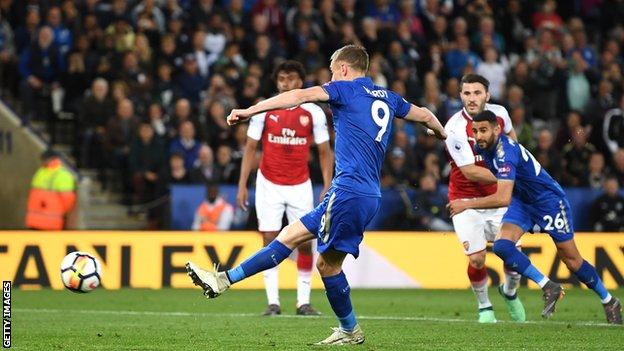 Super Eagles forward, Alex Iwobi was in action for Arsenal on Wednesday night at the King Power Stadium, where they picked up another away loss with a 3-1 defeat to Leicester.

Iwobi was playing against his compatriot, Kelechi Iheanacho, who was on target for the home side.

The goal was Iheanacho’s second in the league this season after making his 20th appearance.

The defeat means Arsenal have failed to secure a single away point in 2018.

Also, Arsenal have now lost seven consecutive top-flight away matches for the first time since January 1966.

At Stamford Bridge, Victor Moses was an unused substitute as Chelsea played 1-1 draw with Huddersfield Town.

After an uneventful first half, Huddersfield took a surprise 1-0 lead in the 50th minute as Laurent Depoitre scored from the rebound as his first effort was saved by Willy Caballero.

Chelsea equalised in the 62nd minute through Marcos Alonso who got the last touch from Mathias Zanka attempted clearance.

The draw saw Huddersfield confirm their safety in the Premier League for next season.

Chelsea remain fifth on 70 points after 37 league games in the league table, two points adrift of fourth-placed Liverpool with only one round of games left.

In the other Premier League games on Wednesday night, Tottenham edged Newcastle 1-0 to seal their place in top four; while champions Manchester City defeated Brighton 3-1 to set new EPL records for the number of points garnered and goals scored in a single season.