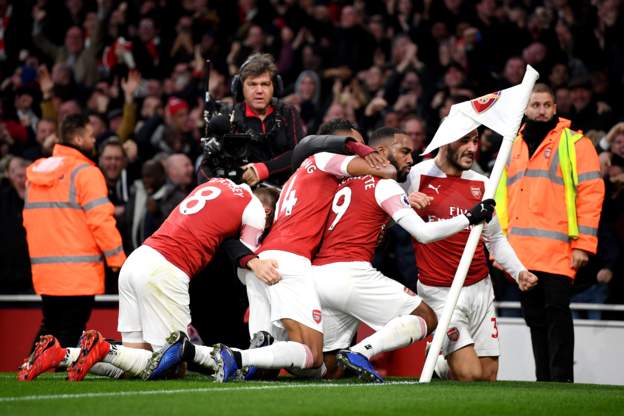 Super Eagles forward, Alex Iwobi was subbed off at halftime in a tactical change by Arsenal, who beat Tottenham in a Premier League clash on Sunday.

The North London derby, played at the Emirates Stadium, saw the hosts fight back from 2-1 down to win 4-2.

Iwobi made the starting pack for Unai Emery’s side, who got ahead early in the game as Pierre-Emerick Aubameyang scored from the spot after Jan Vertonghen’s handball.

Eric Dier glanced home Christian Eriksen’s free-kick to equalise, before Harry Kane scored from the spot after Rob Holding was penalised for a challenge on Son Heung-min.

Losing 2-1 by half-time, Iwobi and Mkhitaryan were subbed off, as Emery introduced Alexandre Lacazette and Aaron Ramsey at the start of the second half.

Aubameyang scored his second of the day with a magnificent finish in the 56th minute, and Lacazette’s deflected shot beat goalkeeper Hugo Lloris to put Arsenal ahead again with 16 minutes left.

And three minutes after, Lucas Torreira ran clear to wrap up Arsenal’s win and Spurs ended up finishing with 10 men after Vertonghen was sent off for a foul on Lacazette.

Arsenal extended their unbeaten run to 19 matches in all competitions, moving above Spurs into the top four of the Premier League.