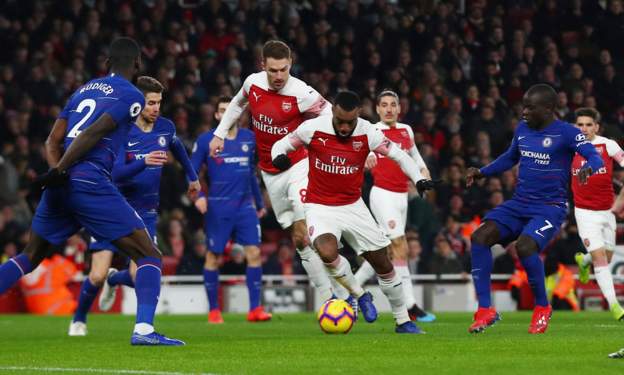 Super Eagles forward, Alex Iwobi played a sub role as Arsenal earned an important win in a pulsating London derby against Chelsea at the Emirates on Saturday.

The Gunners secured the 2-0 victory to keep themselves in the race for the Premier League top four.

The victory moves them to within three points of fourth-placed Chelsea and back above Manchester United, who had gone fifth by beating Brighton earlier on Saturday.

After a tensed opening minutes, Alexandre Lacazette put the hosts ahead when he turned in the box and beat Kepa Arrizabalaga with a fierce strike.

Arsenal deservedly added a second through captain Laurent Koscielny in the 39th minute.

The Unai Emery side then kept on to their lead through a thrilling second half and won the London derby.

“I’m very pleased with this victory and these three points. After our defeat at West Ham we needed to show our supporters a strong moment,” Emery said after the game.

“We can be optimistic because we are closer to a lot of teams like Chelsea, Tottenham and Manchester United.

“I’m very happy with the last 20 minutes and how we defended against them. The first half made the difference with the result, but in the second half we showed how we can defend together.”