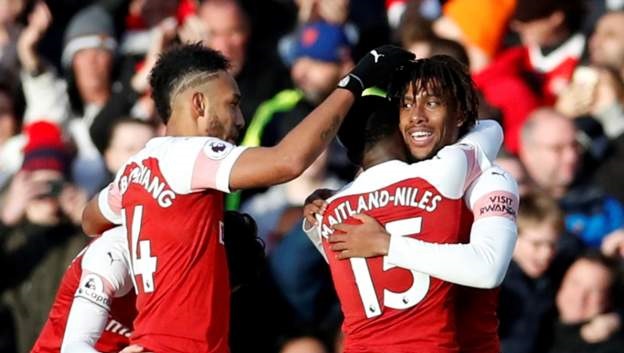 Super Eagles forward, Alex Iwobi scored for Arsenal in their 3-1 victory over Burnley in a Premier League encounter at the Emirates Stadium on Saturday.

Iwobi, who started the game on the bench and was brought into the game on 78 minutes as a substitute for Alexandre Lacazette, completed the rout for the hosts in the 91st minute.

The Nigerian ended his goal drought with the goal – his second Premier League goal of the season and in his 80th appearance for Arsenal.

Gabon striker Pierre-emerick Aubameyang had scored twice earlier as the team got on their way to bouncing back from two straight defeats to win against a spirited Burnley.

His first goal came in the 14th minute after great work in the build-up between Mesut Ozil and Sead Kolasinac; and his second three minutes into the second half.

Read Also: Playing in second division not in my plans -Ighalo

At 2-0, the visitors halved the deficit on 63 minutes with a low finish from Ashley Barnes after Arsenal failed to clear.

Burnley continued to push for an equaliser but Iwobi scored from close range in stoppage-time to ensure the Gunners maintained their push for top four spot.

Aubameyang now has 12 goals to his name in the league this season.

And only Egypt superstar, Mohamed Salah, with 24 goals, has more Premier League goals since Pierre-Emerick Aubameyang’s debut than the Gabonese (22).