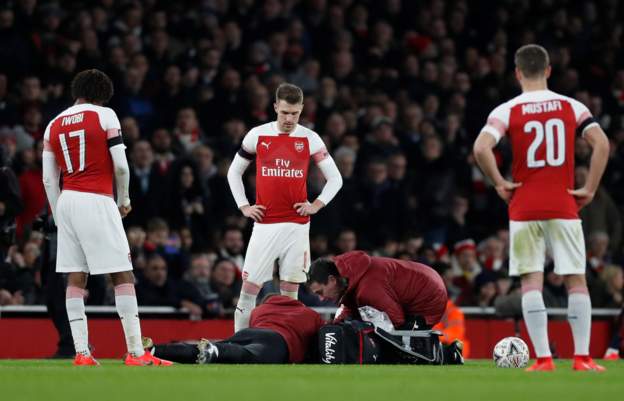 Super Eagles forward, Alex Iwobi was subbed off during Arsenal’s home loss to Manchester United in their FA Cup fourth round clash at the Emirates Stadium on Friday night.

The Gunners fell 1-3 to the Red Devils, who are now into the round of 16 of the competition.

The defeat for Arsenal came at the back of a 2-0 victory over city rivals Chelsea in the Premier League last weekend.

It is all joy for United, who extended their winning run to eight in a row and have not lost a game since interim manager, Ole Gunnar Solskjaer, took over the team.

The visitors went ahead when Alexis Sanchez netted from a tight angle against his former club.

Jesse Lingard scored from 12 yards out to double the lead, with both goals set up by Romelu Lukaku.

Arsenal got back in the fight as Pierre-Emerick Aubameyang pulled one back before halftime.

But Anthony Martial sealed the win when he scored from a rebound after Petr Cech parried Paul Pogba’s shot.

And there were more woes for Arsenal as they lost centre-backs Sokratis Papastathopoulos and Laurent Koscielny to injury during the game.

“Today was a big step forward. It was a massive improvement from the Tottenham game. It’s easy to get excited and talk about the future but we need to just keep working and think about the next game,” said Solskjaer.