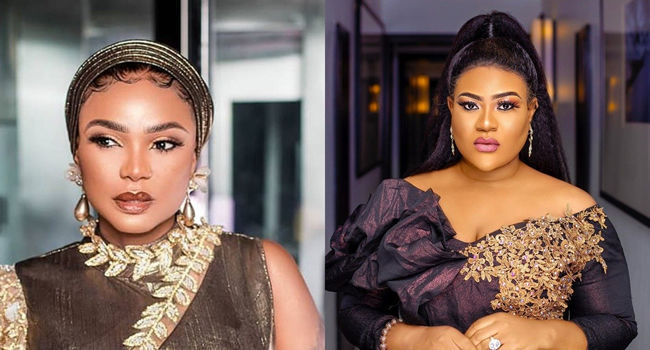 The Board of Trustees of the Theatre Arts and Motion Pictures Practitioners Association of Nigeria, (TAMPAAN) has issued a stern warning to actresses, Iyabo Ojo and Nkechi Blessing for their unruly behaviour.

Specifically, the association stated this at a press briefing on Saturday, June 26 that they will no longer tolerate the derogatory remarks and embarrassments from the aforementioned actresses.

Recall a couple of weeks ago, Nkechi Blessing was suspended for her involvement in an altercation with colleague, Kehinde Adams better known as Lege Miami on social following the arrest of alleged paedophile, Baba Ijesha real name Omiyinka Olanrewaju. While, Iyabo Ojo was accused of insulting other actors for keeping mute about the alleged rape issue.

Speaking on behalf of the Board of Trustees, the veteran actor, Chief Jide Kosoko, stated;

“We particularly observe the continuous derogatory statements made by Iyabo Ojo against the association and the industry as a whole.”

Nothing that they were against all forms of sexual assault, the communique accused Iyabo Ojo’s of “reckless accusations, abuses and embarrassment of our sector”.

“If we allow the continuous blackmail to go unchecked, the current situation will continue to grow to the detriment of humble practitioners, whose only source of livelihood is the practice of Indigenous language movies.

“Unfortunately, Nkechi Blessing has also joined in the Ignoble tirades against the Association and by extension, the industry and we say enough is enough!

“Without the platform God gave you and many others of your likes through us to climb up the ladder and express your creativity, you may not be this visible today.”

On the views of Deji Aderemi, popularly known as Olofa Ina, the elders said his comments were personal.

“The association does not condone immorality. If two consenting adults decide to have things in common, it does not mean that it is the standard practice.

“The utterances from the likes of Iyabo Ojo, Nkechi Blessing and others are regarded as unfortunate words spoken by people who should know better as they have benefitted immensely from the association and industry.”

Meanwhile, Baba Ijesha faces six-count charges bordering on the indecent treatment of a child, sexual assault, sexual assault by penetration, among others.