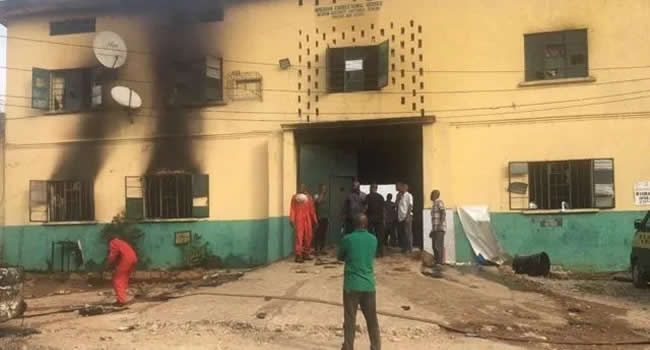 The Nigerian Correctional Service (NCoS) said on Monday at least 1,844 inmates escaped from the Owerri custodial centre, Imo State, following attack on the facility by gunmen.

Gunmen had on Monday attacked the custodial centre and set inmates free.

The hoodlums also set fire to vehicles and the service administrative building during the attack.

The NCoS spokesman, Francis Enobore, who confirmed the attack in a statement in Abuja, said the gunmen stormed the facility in the early hours of Monday and gained entrance into the premises by using explosives to blast the administrative block.

According to him, 35 inmates refused to escape while others fled.

He added that six of the fleeing inmates had voluntarily returned to the custodial centre.

Enobore said the NCoS Acting Controller-General, John Mrabure, has ordered a comprehensive investigation into the incident.

The exercise would be undertaken in conjunction with other security agencies.

The spokesman said: “The Owerri Custodial Centre in Imo State has been attacked by unknown gunmen and forcefully released a total of 1,844 inmates in custody.

“The attackers who stormed the facility at about 0215hrs on Monday 5th April, 2021, gained entrance into the yard by using explosives to blast the administrative block.

“They were said to have arrived at the centre in their large number in several Hilux pick-up vans and Sienna Buses armed with sophisticated weapons and immediately engaged the security personnel on duty in a fierce gun battle. They eventually detonated the explosive to gain entrance.

“The Acting Controller-General of Corrections, John Mrabure has ordered a comprehensive investigation into the incident and in collaboration with other security organizations, commenced search and recovery operations to recapture the fleeing inmates.

“While appealing to the good citizens of Imo State and indeed Nigerians to volunteer useful intelligence that will facilitate the recovery effort, the Ag. Controller-General wishes to assure that the security of custodial centres in the country remains sacrosanct.

“He equally directed all officers attached to custodial facilities to remain vigilant at this trying moment in our history.

“As at the last count, six inmates have so far voluntarily returned to the facility while 35 inmates refused to escape from custody during the attack.”