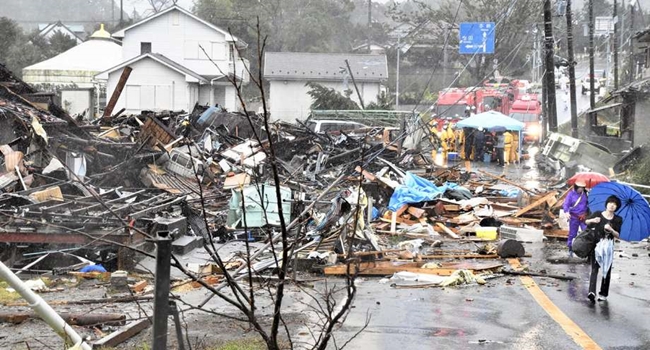 The death toll arising from the deadly typhoon Hagibis which made a land fall in Tokyo, Japan early on Sunday has risen from 33 to 66.

The rising number of victims lost due to the natural disaster comes as rescue officials slogged through mud and debris in an increasingly grim search for survivors.

According to national broadcaster NHK, thousands of homes remained without power or water while some 15 people remain missing, and 200 more were injured in the storm regarded to be the deadliest in history.

“I checked the flood hazard map but it didn’t have my area as being at risk,” said Yoshinagi Higuchi, 68, who lives about 100 metres from one levee and waited out the flood on the second floor of his house as the ground floor filled with water.

“I heard there was a flood once before the war, but we just weren’t expecting the water to come over the levee despite all the warnings.”

The devastating effect of the typhoon has forced authorities to deploy tens of thousands of troops and rescue workers to save stranded residents and fight floods caused by the storm.

Typhoon Hagibis – which means “speed” in the Philippine language, Tagalog – was the most powerful typhoon to hit Japan in six decades.

Related Topics:Japantyphoon Hagibis
Up Next