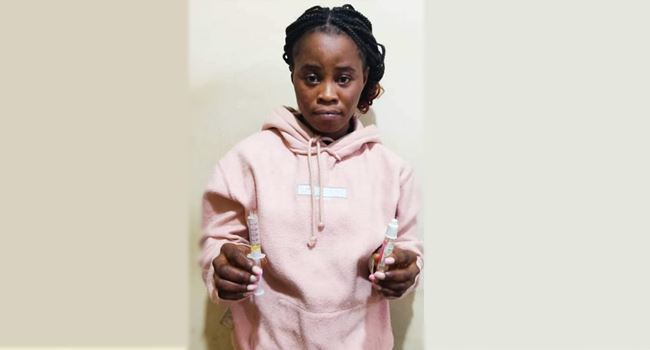 The Enugu State Police Command has arrested a 29-year-old woman, Nnenna Egwuagu, for allegedly taking her jealousy to the extreme by injecting her three-year-old stepson with a poisonous substance known as Sniper, which led to his death.

The state Police Public Relations Officer (PPRO), DSP Daniel Ndukwe, who confirmed the development in a statement made available to Ripples Nigeria on Monday, said the distraught father of the boy, Justine Egwagwu, reported the matter at the 9th Mile Police Division.

Ndukwe said the boy’s father had suspected foul play when the child died suddenly and was quick to suspect his wife who had, at various times, mistreated the boy on numerous occasions in the past.

Not satisfied with the circumstances behind his son’s death, Justine reported the matter to the police leading to the arrest of Nnenna.

The police spokesman said on interrogation, the suspect confessed to committing the crime on the grounds that she “resorted to that wicked act to ganner the attention of her husband towards her upkeep and that of her daughter.”

“Her husband and father of the deceased child, one Justine Egwuagu, who reported the incident to the Police, alleged that the unusual actions of the suspect towards the child caused his death.

“Preliminary investigations shows that the suspect confessed to having administered the noxious substance, suspected to be Sniper insecticide, on the child.

“She claimed that her action was due to her husband’s inability to take care of her and their daughter; and that she wanted the child to become sick so her husband could spend money to treat him.

“The baby was confirmed dead in the hospital and his corpse deposited in a mortuary for autopsy, while the container of the noxious substance and syringe she used in administering the substance on the child have been recovered, while further thorough investigation into the case is ongoing at the State CID, Enugu.”