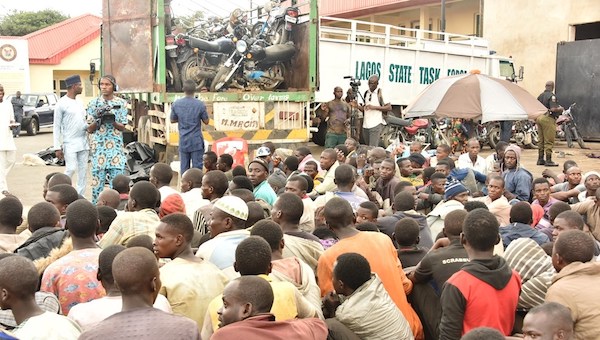 Jigawa State Governor, Muhammad Badaru Abubakar, has reacted to the arrest of 123 motorcyclists, popularly known as okada riders, by the Lagos State Government.

Abubakar said the Lagos State government had been contacted over the “unlawful” arrest of 123 okada riders who are indigenes of Jigawa State.

The men were arrested on Friday with 48 motorcycles in a truck after they were intercepted by the Lagos State government Environment Sanitation and Special Offenses Taskforce.

Lagos State government had revealed that the truck was seized following a tip-off by members of the public who raised security concerns about the manner the occupants of the truck conducted themselves.
They motorcyclists were accused of illegal mass movement to Lagos.

Gov Abubakar, in a statement by his Personal Secretary, Auwalu D. Sankara, on Saturday, said: “After getting in touch with the officials of the Lagos State government, Governor Badaru, who was not in the country also spoke to the All Progressives Congress, APC, leader, Asiwaju Bola Tinubu, who assured of their unconditional release,” he noted.