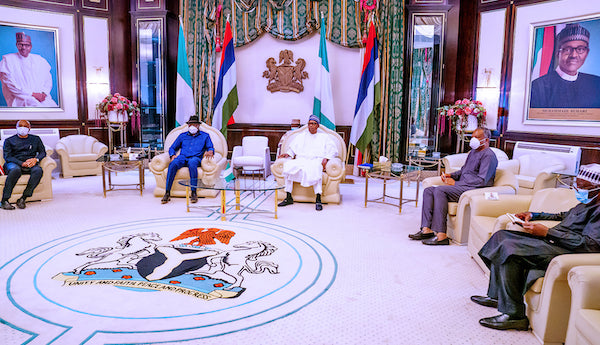 The briefing was the third since the former Nigerian president was appointed by the sub-regional body to broker peace in Mali.

He was appointed ECOWAS special envoy in Mali a few weeks before a group of dissident soldiers toppled President Boubacar Keita in a military coup.

The Special Adviser on Media and Publicity to the President, Femi Adesina, who disclosed this in a statement after the meeting held at the Presidential Villa, Abuja, said ECOWAS leaders would meet again soon to discuss the current situation in the landlocked West African country.

The statement read: “Heads of State and Government of the Economic Community of West African States, at the behest of their Chairman, President Nana Akufo-Addo of Ghana, may confer again to discuss outstanding grey areas in the Mali political situation, President Muhammadu Buhari has indicated.

“Mali has appointed a civilian as Interim President, who will stay in office for 18 months, and lead the country back to constitutional order, after the military had taken over power in the country. That was part of irreducible demands by West African leaders before sanctions imposed on the country could be lifted.

“However, according to the Special Envoy, the military leaders are yet to satisfy ECOWAS demand of a full civilian as Vice President, and what his roles would be in government. That position is currently being held by a serving military officer, who was also one of the leaders of the take-over.”

President Buhari, according to the statement, advised Jonathan to present a formal report to the new ECOWAS Chairman, President Nana Akufo-Addo, on the matter.

Related Topics:BuhariECOWASGoodluck Jonathan
Up Next

How Nigeria can achieve transformation – Buhari