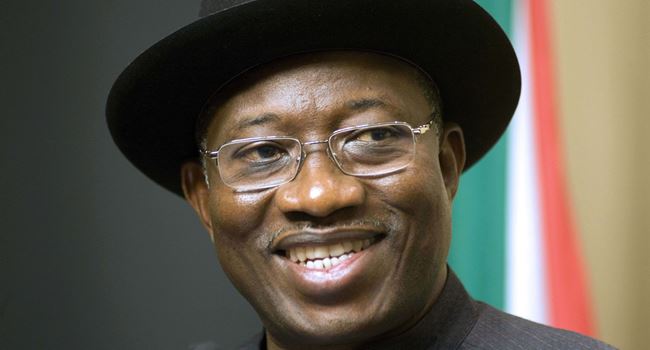 Former President Goodluck Jonathan in Saturday denied making comments being ascribed to him on the position of the Niger Delta over agitations for a sovereign state of Biafra.

The former President made the denial in a statement by his media adviser, Ikechukwu Eze, disowning the online publication that claimed he made the comments at an event in Texas, United States of America recently.

Describing the report as false, Jonathan said he couldn’t have presented the purported speech because he neither travelled to the US nor sent anybody to represent him at the unnamed event.

According to Eze, it was the second time in three years that Jonathan would be issuing a disclaimer on the purported speech and blamed the development on the effort of some “unscrupulous people” to tarnish Jonathan’s image.

The statement reads: “Our attention has been drawn to a fake story with the title, ‘Why Niger Deltans don’t want to be part of Biafra’ currently circulating online and purported to have been taken from a speech allegedly presented by former President Dr Goodluck Jonathan at an unnamed event in Texas, the United States.

“The story which is being recycled in some online platforms claimed that the former President allegedly spoke on the relationship between the people of the Niger Delta and South East states while addressing the broader issue of agitation for Biafra.

“We thought we had finally dealt with the issue of this falsehood with our timely and well publicised disclaimer, soon after the supposed speech first surfaced online in 2017. However, it beggars belief that the same jejune and disastrous effort at speech writing, hatched by some yet-to-be-identified shady character, is again being served to the social media public as a fresh dish.

“We want to clearly state, as we did in 2017, that there was no such event involving the former President and that Dr Goodluck Jonathan will never present such a sloppy and hate-filled speech.”

Related Topics:BiafraJonathanniger delta
Up Next

Dele Momodu’s muted celebrations, Daddy Showkey’s call to investigate the poor, NIS’ female officers brouhaha, and all the hot gists that made the rounds