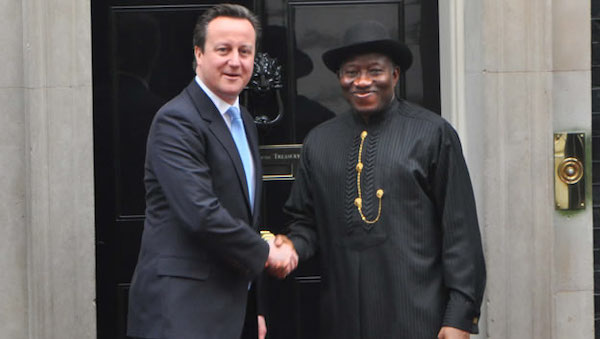 Former President Goodluck Jonathan has denied claims by the former Prime Minister of the United Kingdom, David Cameron that he (Jonathan) turned down help to rescue the abducted Chibok girls.

Some female students were kidnapped on the April 14, 2014 from the Government Secondary School in the town of Chibok in Borno State. They were abducted by Boko Haram terrorists.

Cameron, in his recently published memoir, ‘For the Record’, alleged that British troops traced the location of some of the victims and offered to help but Jonathan refused.

The former PM, who was in office at the time of the abduction, said Jonathan was “sleeping on the wheel” while terrorists were busy abducting schoolgirls in Chibok, Borno State.

He wrote: “In early 2014, a group of its fighters entered the government secondary school in the village of Chibok, seizing 276 teenage girls. They were taken to camps deep in the forest. The Christians among them were forced to convert to Islam. Many were sold as slaves, entering the same endless violent nightmare the Yazidi women suffered.

“As ‘Bring Back Our Girls’ campaign spread across the world, we embedded a team of military and intelligence experts in Nigeria, and sent spy planes and tornadoes with thermal imaging to search for the missing girls. And, amazingly, from the skies above a forest three times the size of Wales, we managed to locate some of them.”

“But Nigeria’s President, Goodluck Jonathan, seemed to be asleep at the wheel. When he eventually made a statement, it was to accuse the campaigners of politicising the tragedy. And absolutely crucially, when we offered to help rescue the girls we had located, he refused.”

However, Jonathan, reacting to the allegation, urged the public to disregard Cameron’s accusations.

He said, “I would urge the public to take Mr. Cameron’s accusations with a grain of salt. I will not be the first person to accuse him of lying on account of this book, and with the reactions in the UK so far, I definitely will not be the last.”

Jonathan, in a statement on Saturday, claimed Cameron “never called me on the phone to offer any help.”

“On the contrary, I am the one that reached out to him.”

The former president said Cameron’s allegations were far from truth. He said his government had requested help from the UK, US, Israel and France, adding that he could not have rejected the help he appealed for.

Jonathan said that history contradicted Cameron because the same Boko Haram-linked terrorists abducted a British expatriate named Chris McManus, along with an Italian hostage Franco Lamolinara, in Sokoto on March 8, 2012 and he authorised a rescue effort by members of the British military Special Boat Service supported by officers and men of the Nigerian Army.

The former Nigerian president said that Cameron failed to mention that he wrote him requesting his help on Chibok.

Jonathan questioned why Cameron suppressed that information, noting “that copies of that letter exist at the State Houses in Nigeria and London.”

In the book, Cameron also accused Jonathan of appointing security chiefs based on political considerations.

Jonathan, however, refuted the claims. He said he fired the country’s service chiefs twice in five years, to show his intolerance for anything less than meaningful progress in the war on terror.

“I was completely blind to ethnic or political considerations in my appointments,” Jonathan said.

The former president said his government appointed people he never met based on their professional pedigree.

Jonathan accused Cameron of keeping grudges against him because he did not pass legislation supporting same sex marriage in Nigeria.

“I came under almost unbearable pressure from the Cameron,” Jonathan said. “I swore on the Bible to advance Nigeria’s interests, and not the interest of the United Kingdom or any foreign power.”

He said Cameron thereafter reached him “through envoys, and made subtle and not so subtle threats against me and my government.”

On the issue of corruption, Jonathan said “Nigeria made her best ever improvement on the annual Transparency International Corruption Perception Index, moving from 144 the previous year, to 136, an 8 point improvement. As a nation, we have not made such improvements on the CPI before or after 2014.”