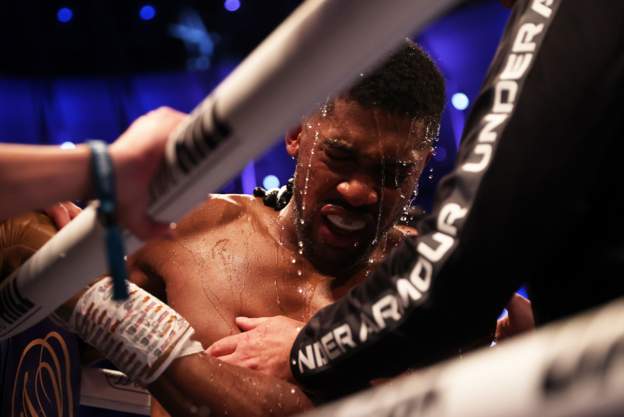 British boxer of Nigerian descent, Anthony Joshua has finally reacted to his shock defeat to Ukrainian Oleksandr Usyk in their heavyweight showdown on Saturday night.

The 12-round fight held at Tottenham Hotspur Stadium saw Joshua defeated for the second time ever as a professional, and also stripped of his WBA, WBO, IBO and IBF heavyweight titles.

Joshua said he could not see anything from the ninth round, with his promoter Eddie Hearn suggesting his fighter may have suffered a broken eye socket.

The 31-year-old went on to say the defeat was “a great lesson” for him and he hopes to do much better when both fighters meet again in a rematch.

Asked after the fight about what went wrong, the defeated Briton said: “I couldn’t see in the ninth round, couldn’t see anything really because my eye was shut.

“So when I couldn’t see anything – it’s the first time that it’s happened in a fight.”

He added: “When I was walking back through the tunnel, I just said to myself, ‘I’m ready to get back to the gym, I’m ready to just put that work in’.

“I just want to get back to the gym, get back on the grind and improve, so when I fight these good guys and see that they are hurt I can capitalise on the opportunity.

“I’m a different kind of animal. I’m not a sulker. This is a blessed opportunity, to be able to fight for the heavyweight title of the world, fight good fighters time and time again and for people to come out.

“I’m not going to be going home and be crying about it, because this is war. It’s a long process. This isn’t just one fight and then I’m done.

“I’m going back to look at way that I can improve. Straight away, I’ve already been watching the fight and thinking ‘I could’ve done that better’.”

Meanwhile, Tyson Fury, who holds the WBC heavyweight belt will be defending it against American Deontay Wilder in two weeks.