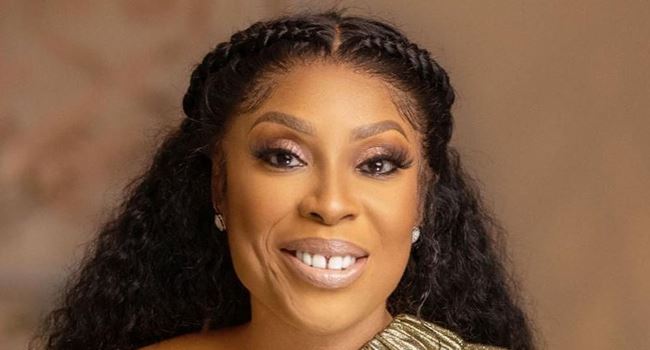 A journalist, Tobore Ovuorie, who accused the Chief Executive Officer (CEO) of EbonyLife, Mo Abudu and EbonyLife Group, of copyright infringement on the movie Òlòturé, has on Thursday, responded after Abudu released a video to address her allegations.

Ovuorie had claimed that Abudu’s film adapted 75 percent of her 2014 undercover investigation on sex trafficking which was published by an online platform, adding that it was done without her express permission.

Mo Abudu however, debunked the allegations in a 10-minute video shared on her Instagram page on Tuesday.

According to Abudu, she had earlier reached out to the publishers of Premium Times, who is Tobore’s employers as of when the story was filed, and obtained a go-ahead to make the film while promising the reporter a cut from its theatre run.

Abudu said: “Tobore wrote the article titled ‘Inside Nigeria’s Ruthless Human Trafficking Mafia’, which was published on August 12 2014 by the Premium Times, her employer at the time. Premium Times Services Limited, the publisher of Premium Times, has disclosed that she can’t lay claim to the investigative report that belongs to them,” she said.

“According to the Premium Times editor-in-chief, only the media company and their partner on that project, Zam Chronicles, can lay claim to the copyright of that report based on Nigeria’s copyright law. We sought and obtained the rights from Premium Times, the owners of the story. As such, we fulfilled our legal obligations.

“We granted her a private screening of the movie; gave her a special mention at the end of ‘Oloture’. And I interviewed her on ‘Moments with Mo’. In addition, we wrote to her and offered her five percent of the proceeds from our plan to cinema-run. This is to go towards her NGO, which she acknowledged. We also reached out to other NGOs.

But reacting to Abudu’s statement, Tobore has addressed each of the points Mo Abudu made and went on to list her demands.

2. Whilst I no longer intend to join issues on social media in respect of this matter, I wish to set the records straight for the sake of posterity.

3. Firstly, EbonyLife claimed that the right to use my life story was legally obtained from my erstwhile employer – Premium Times. Unfortunately for them and as I had earlier informed them through my lawyers, the human trafficking investigation in my story had commenced prior to my employment with Premium Times. It is disheartening that Aunty Mo could in fact mention that she got the right to my life-story (that has impacted on my life since then in many ways) from my ex-employer.

4. Secondly, I am in shock that Aunty Mo would claim that I was contacted prior to the Movie in one breath and in another breath that the story is not about me but about several other faceless journalists who had done what I did but did not publish their experiences.

5. If Ebonylife had given me full disclosure from the beginning, we would not be where we are, at this point. Yes, Oloture is an important film to be made but must be done the right way. A Movie about women victimization cannot end up creating further victimization.

6. Oloture is an ADAPTATION of my work and life-story. I experienced the investigation, the process, and the risks, upon which the movie is based. I also single-handedly authored the publication the Movie relied on. The publication of my experience is what gave birth to Oloture. A Movie about sex trafficking does not need to be centered around a journalist and it does not need to play out the plots of my published story.

7. The question is, why is the open credits for the story of Oloture bearing Mo Abudu, Temidayo Abudu, and three others? How ethical is that for an adapted story? Even the alleged end credit, how appropriate is it? This is not the standard practice in the industry and Ebonylife should know better.

8. Aunty Mo’s claims that Kenneth Gyang has had to deal with daily and weekly harassments from me is completely false. On October 4th, 2020 Kenneth Gyang confessed in the published Premium Times story that he became aware of the Oloture story, two weeks before the release of the film. A film director- whom I had worked with on a 30 minutes documentary on this same story in 2016, told Kenneth the actual source of the story and had warned him of the consequences.

9. Kenneth Gyang contacted me to grant an audio interview to DW, but my lawyers had advised me against further media engagement on the subject. I also considered Kenneth’s disposition when he asked for this, and rather than mincing my words in an interview that came through Kenneth Gyang, I decided not to grant it. It would be morally wrong for me to grant such interview when he is the person that released my contacts to the reporter who reached me then.

10. Aunty Mo’s claim that I am doing this because of money and because Oloture traveled far is another deliberate attempt at mischief. The question is whether the decision to tag this movie a fiction was a deliberate attempt at maximizing profit? The allusion to the fact that my claim for compensation was outrageous when I am claiming infringement of intellectual property right, shows that a lot needs to be done in terms of re-orientation for the entertainment landscape in Nigeria.

11. My obvious interest had always been to be given appropriate credit for my work, far above the compensatory claim. My lawyers’ letter to EbonyLife had categorically demanded for:

• The immediate inclusion of a proper open credit and end credit in the Movie, acknowledging the adaptation of her work in line with industry standard and practice; and

• Restriction on any further exploitation of our Client’s published life story by your good self, your company and its related companies or affiliates, in any form, including our Client’s post -investigation struggles and experiences, such as her nervous breakdown episodes, which she personally shared with you on set, on or about 6 June 2019 during the recording of the special edition of your program titled: ‘Moments With Mo’ at the Ilupeju recording studio of your company.

The open and end credits of the Movie should be re-edited to read as follows:

Open Credit:
“THIS FILM IS LARGELY BASED ON EVENTS WHICH HAPPENED TO A NIGERIAN INVESTIGATIVE JOURNALIST IN A 2014 PUBLISHED INVESTIGATIVE STORY”.

End Credit:
“THIS FILM IS AN ADAPTATION OF:
WEST AFRICA| UNDERCOVER INSIDE THE HUMAN TRAFFICKING MAFIA, AN INVESTIGATIVE STORY BY TOBORE OVUORIE PUBLISHED BY ZAM MAGAZINE, NETHERLANDS, ON 22 JANUARY 2014 AND SUBSEQUENTLY BY PREMIUM TIMES, NIGERIA”.

12. On July 3rd, 2020, my father; Senior Apostle Jack Mit Ovuorie went to be with the Lord and I was informed on July 4th, 2020. My dad and God were all I had. I sent messages out to all the contacts on my phone subsequently, to inform them to please remember my family and I in prayers; including Aunty Mo, at that time (before the release of Oloture). I have NEVER asked Aunty Mo for money. Rather, she sent me a message to send my account details for her to send me a token towards my dad’s burial. I did. And she subsequently sent me N100,000.00 (one hundred thousand naira). My former editor at the Guardian newspaper, Mr. Fred Ohwahwa also sent me some money on hearing my dad had passed on. Several former bosses, and colleagues and people I have NEVER even met came through for me. I was and I am still very grateful to all of them. Having watched the video, I now begin to wonder: The N100,000 sent by Aunty Mo, was it more than a gift? Was it intended to buy my silence when the film would be released?

13. So many women around the world are trafficked as claimed by Aunty Mo, but who else, and I also mean undercover journalists, have same experiences as published before the production of Oloture and as depicted in the movie? Making of a film on exploitation should not itself be exploitative.

14. I almost died (and I saw death) when I took a 7-month long journey to investigate human trafficking. Now, I am going through the ordeal a second time watching my life story on TV, without full credit or compensation and the subsequent campaign of calumny.