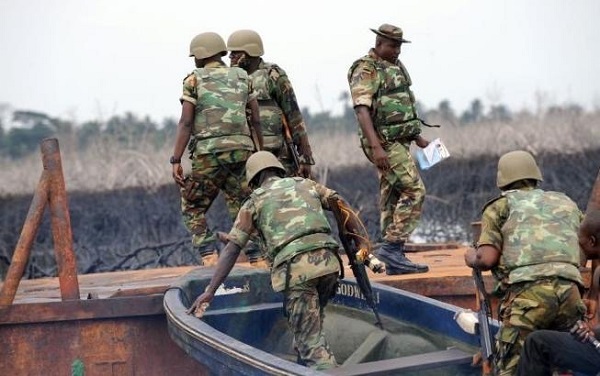 A joint operation by troops of the Joint Task Force (JTF) in the Niger delta and a local surveillance group has brought about the seizure of a tugboat and a barge laden with over 200,000 litres of suspected stolen crude off the Atlantic coast of Akassa, Bayelsa State.

In reaction, residents of Bayelsa State coastal communities lauded the collaboration between the JTF deployed to the Niger Delta and surveillance contractors for tackling oil theft.

A community leader in Akassa, Chief Dona Biena said the renewed effort was putting oil theft in check. Biena, who commended the joint military force for improved patrols of the waterways said, the development had also reduced the activities of sea pirates.

He noted that the local surveillance group, Labrador Security leveraged on its knowledge of the terrain and provided intelligence and logistics to the troops.

A member of the surveillance group who participated in the operation said, the vessel was being pushed by a tugboat when it was apprehended.

It was gathered that the barge and tugboat were initially anchored at Labrador Security base in a coastal town at Bille and handed over to Nigerian Security and Civil Defence Corps on March 25.

On his part, Commander of the JTF, Rear Admiral Suileiman Apochi said that oil production figures from the Nigeria National Petroleum Corporation (NNPC) had indicated an upward swing in production in the past three years.

Sulaiman said that the country’s oil production had increased to 2.2 million barrels per day from 900, 000 barrels per day because of the significant progress recorded in the fight against pipeline vandalism, militancy, and kidnapping, among others.

The force commander said that oil production rate had fallen to about 900,000 barrels per day three years ago just before the JTF was reorganised and repositioned for improved performance.