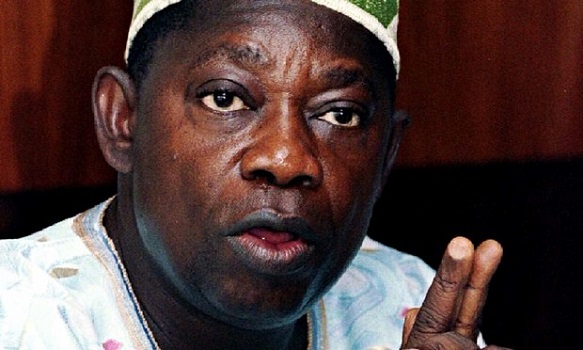 Nigerians assembled at the polls on June 12, 1993 to expunge dictatorship and usher in purposeful leadership. The widely acclaimed free, fair and credible presidential election, presumably won by Moshood Kashimawo Olawale (MKO) Abiola, was annulled by the Gen. Ibrahim Babangida led military regime. Abiola was incarcerated by successive military government(s) till he died in a questionable manner on July 7, 1998. Succeeding democratic governments neither honored Abiola nor venerate the significance of June 12 to Nigeria’s democracy.

25 years on, President Muhammadu Buhari – an ex-military dictator that once flawed democracy by ousting then President Shehu Shagari – pronounced June 12 Democracy Day and posthumously confer Nigeria’s highest honor, Grand Commander of the Order of the Federal Republic, GCFR, to Abiola. His running mate, Ambassador Babagana Kingibe and a revered human rights activist, late Chief Gani Fawehinmi were both conferred GCON (Grand Commander of the Order of the Niger), the second highest honor in Nigeria. This startling executive order has raked in kudos, knocks and questions from both the apolitical and the political. Weighing in, this piece appraise the rationale behind President Buhari’s decision and the effect on his 2019 re-election bid.

The annulment of Abiola’s mandate is rooted in the post-coup bigotry and ethnic superiority struggle that dates back to shortly after Nigeria became a republic in 1963. During the colonial era, Nigerian autonomists were united because they share a common wish to end foreign rule. After achieving their goal, inter-ethnic power struggle and intra-gang feud led to mutiny. Nnamdi Azikwe’s government was ousted by the military on January 15, 1966. Through coups and counter-coups, Nigeria remained under the stern control of the military till then Gen. Olusegun Obasanjo surrendered power to a democratically elected Shehu Shagari in 1979. Ex-president Shagari was ousted from office in 1983 by the then Major General Muhammadu Bahari, now incumbent President. In 1985, the Buhari military regime was toppled by General Ibrahim Babangida, who declared himself Military President.

Under a two-party system – the Social Democratic Party (SDP) and the National Republican Convention (NRC) – Babangida’s military government organized the June 12, 1993 annulled election that was presumably won by SDP’s Abiola. Babangida stepped down after much pressure from the international community and pro-democracy activists. His resignation ushered in the Chief Ernest Shonekan’s Interim National Government that was deposed by late General Sanni Abacha in 1993. Abacha’s death in 1998 ushered in General Abdusalam Abubukar, who handed over power to the elected Chief Olusegun Obasanjo in 1999. Democracy has since firmed its roots in Nigeria as the successive governments of late Umar Yar’Adua, Goodluck Jonathan and now Muhammadu Buhari emerged through election.

Buhari’s decision to honor Abiola, Kingibe and Fawehinmi is indeed a commendable show of outstanding statesmanship. The declaration of June 12 as democracy day is a double edged sword. It rights the wrongs of the junta and demeans Obasanjo and Babangida, the saboteurs of June 12 and foremost critics of the Buhari administration.

Babangida’s oust of Buhari’s military government in 1985 and the complot against his 2019 reelection would naturally make anything that would humiliate Babangida appealing to Buhari. The politics is unambiguous. Buhari served as PTF Chairman under the Abacha regime that incarcerated Abiola and he never clamored for the restoration of the June 12 mandate. One must not over query Buhari for obeying the rules of food etiquette. You don’t talk while eating! Since elected president, Buhari has never voiced his displeasure to the annulment of June 12. Abiola wasn’t even acknowledged in the democracy day speech he delivered on May 29. More than meets the eye, Buhari’s sudden decision to venerate June 12 makes many question the sincerity of his intentions.

Obasanjo’s relentless attack on the Buhari government also makes the reviving of June 12 a political masterstroke for Buhari. It is an open secret that Obasanjo’s emergence as President in 1999 was to compensate the Southwest for the annulment of Abiola’s mandate. Nigerians were thus dismayed that Obasanjo completely distanced himself from June 12, despite being the greatest beneficiary. Obasanjo disregard the pleas of Yoruba leaders that June 12 and the Abiola family be celebrated. He refused to honor Abiola throughout his eight years as president. Suddenly, the Buhari presidency been discredited by Obasanjo scored a hat-trick by honoring Abiola has the man who pillared Nigeria’s democracy. Politics is a game of calculated gain. Honoring Abiola to shame his two prime antagonists – Babangida and Obasanjo – was a strategic political decision Buhari gladly took.

The politics surrounding Abiola’s honor is visible to the blind. Buhari is going through some challenges that can jeopardize his reelection. He is not on good terms with the National Assembly, the Judiciary, fellow ex-Army Generals and some stalwarts in the All Progressives Congress (APC). Those against him within the APC are in two sets: the aggrieved APC (aAPC) and the PDP defectors popularly called the new PDP (nPDP). This cluster of hostile force is frustrating Buhari to take drastic measures that’ll ensure he returns elected.

For 2019, Buhari would do anything to retain the support of the Southwest that was instrumental to his electoral victory in 2015. The Southwest has the second largest amount of registered voters; the Southeast and South-South are largely anti-Buhari and; unlike the 2015 election, Buhari would have to share votes with an opposition candidate that would most likely emerge from the Northern region. Based on this arithmetic, political appointments would favor the Southwest more as the election approaches. The Southwest would be pampered and convinced to vote Buhari, but (if he wins) the region would be neglected after inauguration. Nepotism would reign supreme and the northern oligarchy would run the show. Buhari would afterwards pacify the Southwest by handpicking a successor from the region.

Some of the politically exposed persons discounting the significance of June 12 were not part of the democracy struggle. When prominent individuals like Gani Fawehinmi, Olisa Agbakoba and Beko Ransom-Kuti were being imprisoned for confronting the military to reverse the June 12 annulment, people like Senator Dino Melaye – who declared Abiola a non-Nigerian and unqualified for the GCFR honor because he is late – were either silent or abroad living the life. Unfortunately, most of the pro-democracy activists and their children are neither in power nor have the strength to finance and win an election.

The pro-democracy activists are worthy of honor than Kingibe – Abiola’s running mate and presumed vice president elect. Like the biblical Judas, Kingibe compromised when he was needed most. He abandoned the June 12 struggle to pick up a ministerial appointment under the same Abacha government that incarcerated Abiola and allegedly murdered his wife Kudirat.

History should be a compulsory course in our tertiary institutions. The students of University of Lagos (UNILAG) that kicked against ex-president Jonathan’s renaming of the institution in honor of Abiola were toddlers or unborn during the June 12 struggle. The then toddlers are the adults now on social media critiquing the government and abusing the politicians. They are unaware that the democracy Abiola died for earned them the rights and freedom of expression they are enjoying now.

Nigeria may never regain the lost ideals of June 12. Voting then was devoid of ethnic sentiments. Every tribe massively voted Abiola based on their conviction about his personality and campaign promises. In the present day, election results are largely a reflection of ethnic endorsements. The 1993 election was also void of religious sentiments. Abiola-Kingibe ticket was a Muslim-Muslim one, and Nigerians were unbothered, they voted massively for persons of the same religion to become President and Vice-President. This may never happen again. Religious sentiments have gained prominence that any party hoping to win a presidential election must balance the Muslim-Christian equation.

The 1993 election was conducted via a two-party system. Nigeria currently has over sixty political parties. Most of the parties are so syndicated and tribal fixated that they cannot merge or win a presidential election. Nigeria has also not been fortunate to have a selfless human rights lawyer and activist like Gani Fawehinmi. What we have now are gauche rights activists like a Festus Keyamo serving as spokesperson for the reelection campaign of a President flagrantly violating human rights. Ibrahim El-Zakzaky and Sambo Dasuki are still languishing in jail after the court ordered there release.

Immortalizing the dead – no matter how adored – is insubstantial to revive a political goodwill that is drowning due to poor performance. Buhari’s immortalization of June 12 would not yield the expected electoral gain in 2019. Buhari can only garner votes if his government act right to address the yearnings of the people. Nigerians yearn for a government that would (also) for political gains fix the roads; provide affordable healthcare; obey court orders; reduce petrol price; eradicate poverty; provide electricity; clean-up Ogoniland; stop kidnappings; provide employment; rejig the lopsided appointment of service chiefs; fulfill the restructuring campaign promise and; stop the killings by bandits, herdsmen and terrorists. Nigerians are of critical minds and their electoral mandate in 2019 and beyond would be given to anyone with the moral and intellectual competence to attenuate the sufferings of the masses.

This Buhari-Obasanjo-Babangida episode comes with a free lesson: never leave till tomorrow what you can do today! Buhari exploited the inaction of Obasanjo and the masterstroke won him applauds. The Abiola family would forever be grateful to Buhari for turning their shame to fame. Nigerians indeed have a reason to rejoice and be glad. Today is the future we hoped for yesterday.