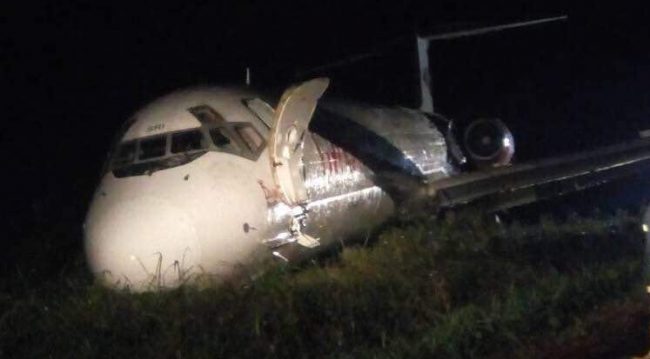 The passengers were subsequently evacuated by emergency officials of the Federal Airports Authority of Nigeria (FAAN).

FAAN said in a statement that the incident was as a result of downpour accompanied by a strong wind and storm.

“The incident was suspected to have been caused by a heavy rain, which was accompanied by strong wind and storm in Port Harcourt.

“No casualty was recorded, as all passengers on board were safely evacuated.”

Dana Air, which also confirmed the incident, like FAAN, attributed it to bad weather occasioned by torrential rain.

The Airline Corporate Communications Manager, Kingsley Okwudili, said in a statement, that “On Tuesday, 20 February 2018, one (of) our aircraft (9j0363) operating the Abuja- Ph flight skidded off the runway at the Port Harcourt International Airport, as a result of the bad weather situation and torrential rain at the time of landing.

“No casualty was recorded and all passengers and crew disembarked safely”.

It was leant that 49 passengers were on board the aircraft.

The airline had its worst period in its operation in Nigeria on June 3, 2012, when Dana Air Flight 992 travelling from Port Harcourt to Lagos, operating a McDonnell Douglas MD-83 aircraft, crashed into a furniture works and printing press building in the Iju-Ishaga neighbourhood of Lagos killing all 153 people on board and 10 more on the ground.

A Ripples Nigeria recent investigation revealed that Dana Air management of Imo Air, purportedly owned by Imo State government, may have been a huge fraud perpetrated against the people of Imo State by the state governor, Rochas Okorocha in collaboration with Dana Air.