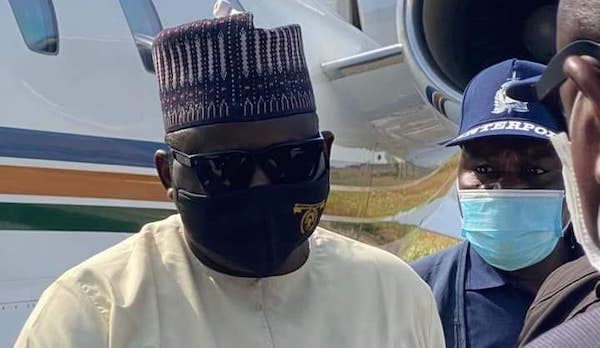 Abdulrasheed Maina, former chairman of the Pension Reform Task Team (PRTT, alleged to have stolen from the pension fund, has been extradited to Nigeria from Niamey, Niger Republic.

Police spokesperson, Frank Mba, made this known in a statement on Thursday.

“The Nigeria Police Force has extradited Abdulrashid Abdullahi Maina, former chairman of the Pension Reform Task Team (PRTT), today, 3rd December, 2020, to Nigeria from Niamey, Niger Republic, where he was arrested having been declared wanted by a court of competent jurisdiction over a pending criminal trial against him,” Mba’s statement read in part.

The former pension task force chief was arrested by police operatives and Interpol in the Nigerien capital on Monday.

Police sources told journalists he would be handed over to the Economic and Financial Crimes Commission (EFCC) later for further investigation.

Maina is standing trial for alleged money laundering to the tune of N2.2billion.

He was arraigned by the commission last year and later granted bail by Justice Okon Abang of the Federal High Court, Abuja, after spending about two months in detention.

Maina, however, refused to appear in court for resumption of his trial in September, forcing the judge to issue an arrest warrant against him.

The judge directed the defendant’s trial to go ahead in his absence.

He also ordered the remand of the Chairman of Senate Committee for Army, Ali Ndume, who stood surety for Maina, in a correctional facility for failing to produce the ex-pension chief in court.

The senator was granted bail on Monday.