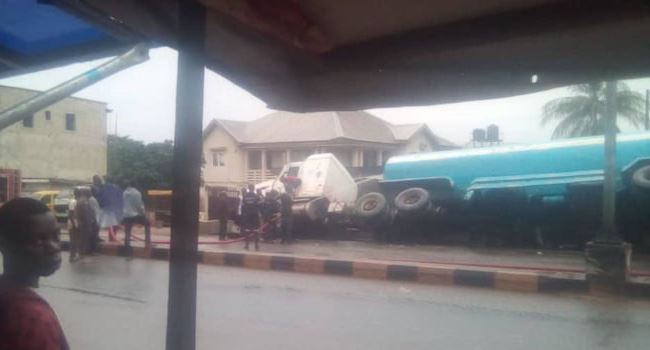 Residents of Akwa, Anambra State, were thrown into panic on Saturday after a fuel-laden tanker fell into a gutter at Saint Patrick’s Catholic Church along Zik Avenue, Awka.

However, no causality was recorded in the accident as men of the state fire service quickly arrived the scene to prevent fire outbreak.

Policemen and other security personnel have also cordoned off the arena.

Eyewitnesses said the incident occurred at about 7:00 a.m. when the long tanker conveying petrol to one of the filling stations in the area skidded off the road and fell into the gutter.

The panic-stricken resident and passersby took to their heels when they sighted the obviously perplexed tanker driver struggling to keep the vehicle on the road.

This is the fourth of such accident in the state in the last four weeks.

In October 16, a fuel-laden tanker skidded off the road and spilled its content on the road in Upper Iweka Road in Onitsha. The resultant fire from the incident destroyed properties worth several millions of naira. At least four people were also killed in the incident.

But no life was lost in that incident.

Related Topics:Anambrafuel tanker
Up Next

Govs, Nigerian govt plan to lift 24m out of poverty in 11 years