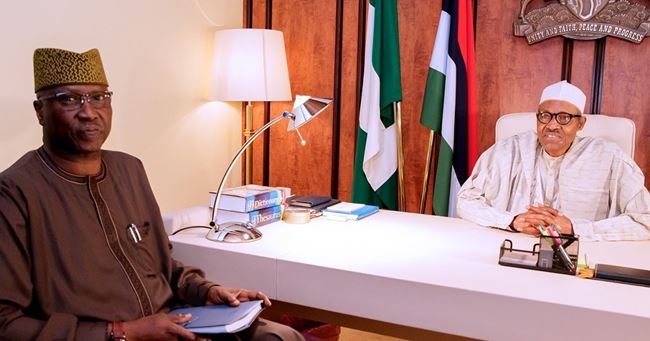 President Muhammadu Buhari has approved the re-appointment of Boss Mustapha as Secretary to the Government of the Federation.

Also, he retained Abba Kyari as Chief of Staff.

This is coming over a month after the President was sworn in for his second term.

The Coalition of United Political Parties (CUPP) had just, on Thursday, filed a suit seeking to stop President Buhari’s aides from retaining their offices without formal announcement reappointing them.

Similarly, Kabir Akingbolu, a Lagos lawyer, had filed a suit seeking to force President Buhari to appoint his ministers on time as provided by law so his second term administration can fully begin.

READ ALSO: ATIKU TO ADELEKE: The Supreme Court has ruled, but this is not the end

The Senior Special Assistant to the President on Media and Publicity, Garba Shehu, on Friday, announced the reappointment of Boss Mustapha and Abba Kyari.

He said both appointments take effect from May 29.

Shehu’s statement read: “President Muhammadu Buhari has approved the re-appointment of Mr Boss Mustapha as Secretary to the Government of the Federation (SGF), and Malam Abba Kyari as Chief of Staff (COS) to the President. Both appointments take effect from May 29, 2019.”

With this development, thee South East region of Nigeria has again lost out in the power sharing of the country as many in the region had sought the office of the Chief of Staff (COS) or Secretary to the Government of the Federation (SGF).
The people of South East had also clamoured for the position of Senate President, Deputy Senate President, Speaker of the House of Representatives or its deputy. All these positions have now eluded the region.

The region’s hope of getting even majority leader of either of the chambers of the National Assembly also failed.