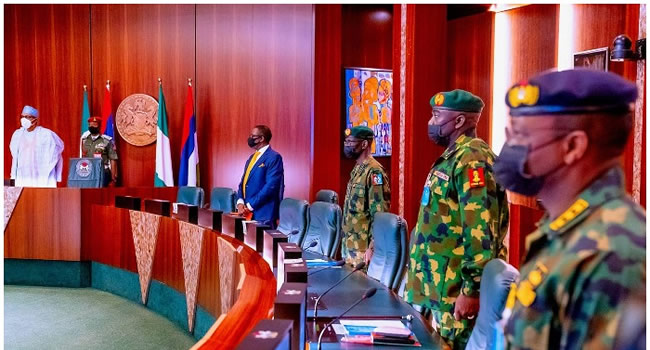 President Muhammadu Buhari is presiding over the continuation of a security meeting at the Presidential Villa, Abuja, which commenced last Friday, but was adjourned to today (Tuesday).

Recall that Ripples Nigeria reported that Buhari, on Friday, April 30, held a meeting with heads of security agencies as part of efforts to find lasting solutions to the heightening insecurity across the country.

The meeting, which took place at the First Lady Wing of the presidential villa, Abuja, ended without any public statement from the presidency, and was rescheduled for Tuesday.

Those who were present at today’s meeting were the Vice President Yemi Osinbajo; Secretary to the Government of the Federation, Boss Mustapha, Chief of Staff to the President, Professor Ibrahim Gambari, Minister of Defence, Major-General Bashir Magashi (Rtd), and the National Security Adviser, Major General Babagana Monguno (Rtd.).

Related Topics:#featuredBuhariservice chiefs
Up Next

APC claims 48% of voters have registered with party