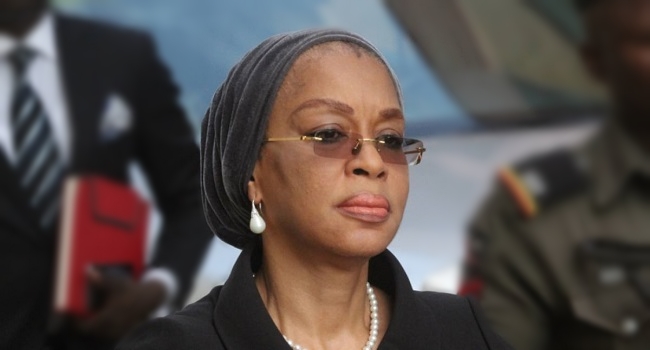 There was a mild drama at the Ikeja High Court, Lagos, as Justice Rita Ofili-Ajumogobia made frantic efforts to escape from operatives of the EFCC who stormed the court to arrest her.

Ofili-Ajumogobia, a dismissed Judge of the Federal High Court initially escaped being waylaid by about 10 operatives of the commission after corruption charges against her were struck out by the judge.

The office of Justice Hakeem Oshodi who ruled over the matter, became her hiding place upon sighting men of the EFCC but Justice Oshodi became helpless as the men finally had their way.

While still searching for a way out, she reportedly engaged in different phone calls to save herself before being whisked away in a white hilux van with Abuja plate number BWR637AT.

Read also: Nnamdi Kanu advises Atiku on how to retrieve his ‘stolen mandate’ from Buhari

Justice Oshodi had in a ruling struck out the 31-count charge filed by the EFCC against Ofili-Ajumogobia and Obla on the grounds that the court lacked jurisdiction to hear the suit.

Referring to the ruling on Justice Nganjiwa Vs FRN, the Judge upheld that EFCC “jumped the gun” in filing the first amended charge.