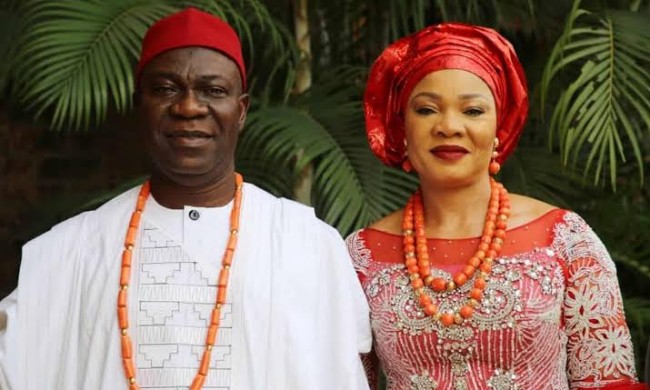 A former Senate deputy president, Ike Ekweremadu and his wife, Beatrice are to still remain in custody of the British government, as the Oxbridge Magistrate Court on Thursday adjourned hearing in the case of alleged human trafficking against them to July 7, 2022.

The couple, who had appeared for an appeal, were remanded in prison custody last week by the court after they were alleged to have conspired to traffic an underage person identified as David Ukpo into the UK for the purpose of tricking him to donate his kidney to the Senator’s daughter.
At the initial appearance, the prosecutor had told the court that the lawmaker brought a 15-year-old boy from Nigeria to the UK with the claim that he was to be given a better life but was actually to harvest his organ to treat their daughter who is suffering from kidney disease.

The court had denied the Ekweremadus bail but following further revelations including the Nigerian Immigration Service coming out to say the boy in question was 21 and not 15 as claimed, and the Nigerian Senate weighing in on the matter by resolving to send a delegation to meet with the Nigerian Consular in London, the couple opted for an appeal.

But the appeal was not successful as the London court once again, denied them bail and again, ordered that they should remain in custody pending the July 7 date fixed for hearing.

The Senate on Wednesday during plenary, had said it was sending a high powered delegation from the Senate Committee on Foreign Affairs to the UK to visit Ekweremadu and his wife, as well as the Nigerian High Commissioner to Britain, Alhaji Isola Sarafa, to liaise with the Consular to provide legal assistance to the embattled Senator.

“There will be a delegation to London to see Senator Ike Ekweremadu and his wife. A delegation from the Senate Committee on Foreign Affairs of the Senate will leave in the next two days for London for that purpose,” Senate President Ahmed Lawan had said after a closed-door session of the lawmakers in Abuja.

“I want to urge all federal government institutions that can do anything to ensure that justice prevails in this case, that they do so.

“I had a personal engagement with our Nigerian High Commissioner to Britain, Alhaji Isola Sarafa, who has done so well to establish contact with our colleague, who has been able to get his team to be in the court at Uxbridge where Ekweremadu was taken to.

“The high Commission has also been able to provide some consular services that include the engagement of some lawyers who will defend our colleague.

“But I want to ensure the family of our colleague, Senator Ike Ekweremadu, and Nigerians, that the Senate will continue to engage with our ministry of Foreign Affairs as well as our High Commission in London. The High Commission has done so much but we still expect that it will continue to provide any other further consular services,” Lawan added.

Discord in Rivers PDP, as aspirants fight over mandate