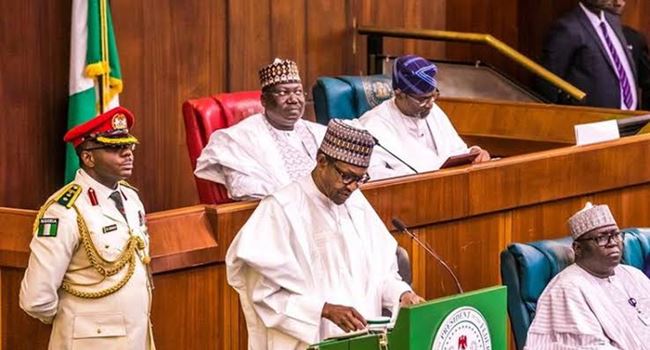 President Muhammadu Juhari on Thursday presented the 2021 budget estimates of the federal government to a joint sitting of both chambers of the National Assembly.

Buhari on arrival was received by the Clerk to the National Assembly, Arc Ojo Olatunde Amos, who then ushered him into the House of Representatives Chambers through the basement door for the event.

Buhari was accompanied to the presentation by Vice President Yemi Osinbajo and a few officials including the Minister of Finance, Secretary to the Government of the Federation (SGF) and his Chief of Staff, Ibrahim Gambari.

Presenting the N13 trillion proposed 2021 Budget, themed ‘Economic Recovery And Resilience’, Buhari said that he hoped the National Assembly would approve the budget proposal in due time.

The president noted that revenue generation to fund annual budgets had remained the greatest challenge being faced by his administration.

He said that the National Assembly would be funded with N128 billion in 2021.

The 2020 budget, he said, was prepared to have a deficit of N4.8 trillion to be financed mainly by borrowing.

According to the president, the federal government had been spending more on recurrent expenditure due to ‘ghost workers’ and unauthorised allowances introduced by Ministries, Departments, and Agencies (MDA’s).

Hence, he ordered heads of the MDAs to get approval before any recruitment.

He said though the economy was facing serious challenges due to the coronavirus pandemic, Nigeria’s economy performed better than that of many other countries.

While he thanked all Nigerians for “your perseverance and continued support during this difficult time,” Buhari said he remained committed to lifting 100 million Nigerians out of poverty in the next 10 years.

READ ALSO: NASS REPUBLIC: On Gbajabiamila‘s riot act to MDAs. Two other stories, and a quote to remember

Buhari who listed some of his administration’s achievements in infrastructure development, added that he would want to complete the construction of the second Niger bridge before the end of his tenure In 2023.

“Second Niger bridge is about 46 per cent complete and we hope to complete it before the end of my tenure in 2023,” he said.

He equally commended the lawmakers for approving the 2020 MTEF and the 2020 revised budget.

They want to kill me! Fayose cries out as thugs remove his cap at rally