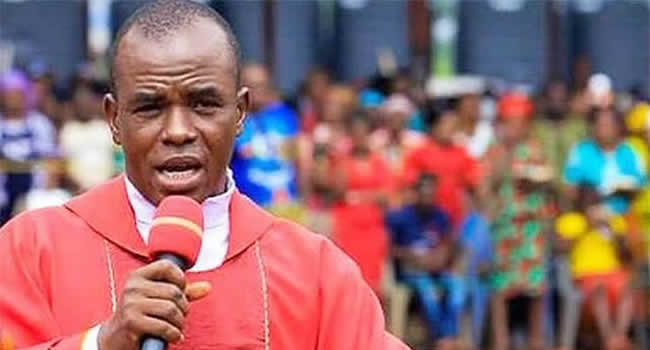 The Spiritual Director of Adoration Ministry, Enugu (AMEN), Rev. Fr. Ejike Mbaka, has been sighted, after speculations that he had gone missing.

Other elated supporters of the priest who struggled to confirm that he was actually in vehicle, took turns to catch a glimpse of him.

“He is the one. I saw Father Mbaka,” one of the supporters jubilated on sighting the cleric.

“He is back! Is it a crime to speak the truth? Nothing must happen to him,” another supporter said.

Mbaka’s disappearance had created a lot confusion with many Nigerians womdering if he had been picked up by the Directorate of State Services (DSS), following his recent altercation with the Federal Government.

Mbaka’s call for the resignation or impeachment of President Muhammadu Buhari had drawn the anger of the Presidency which came out with the accusation that he (Mbaka) was angry that he was not given a contract for supporting Buhari in the 2015 and 2019 presidential elections.

In the wake of the disappearance, the Ohanaeze Ndigbo Youth Council Worldwide had called on the FG to produce the priest within 24 hours or face their wrath.

“We are giving the Federal Government 48 hours to produce the priest, else they should be ready to face Igbo youths.

“They were dining and wining with him all along and now that he told the truth, they are no longer comfortable with him.

“Let nothing happen to Rev. Fr. Ejike Mbaka. It will not be in anybody’s interest,” the group said in a statement by its president, Mazi Okwu Nnabuike

Former aide to ex-president Goodluck Jonathan, Reno Omokri, also added his voice to the confusion that rented the air following the purported disappearance of Mbaka and tweeted that the reverend could have been arrested by security operatives.

“Reverend Father Mbaka has very strong honesty issues that he has to resolve with His Maker.

“However, I am against any arrest or attempt to infringe on his freedom by the @MBuhari
regime. Reports of his arrest by unknown gunmen, if true, are condemned. #FreeMbakaNow!!!”

The controversy that trailed the whereabouts of the cleric had almost caused a riot as his supporters staged a protest in Enugu over rumours that he had been arrested by yet-to-be-identified security operative.

The protesters who were in their thousands, had stormed the Enugu Catholic Bishop’s Court over the purported disappearance of Mbaka.

The faithful were said to turned up at the Adoration ground for the regular Wednesday programme tagged, “I no dey,” when they learned that their spiritual father had gone missing.

The angry worshippers reportedly went berserk and staged a protest and in the process, vandalised properties at the Bishops Court.

With the speculations rife in the air that Mbaka could have been arrested by the DSS, the secret service was forced to come out with a defence, stating categorically that Mbaka was not in its custody.

“He (Mbaka) is not with the DSS, please,” a spokesperson for DSS, Peter Afunnaya, said in a short statement to clarify its position.