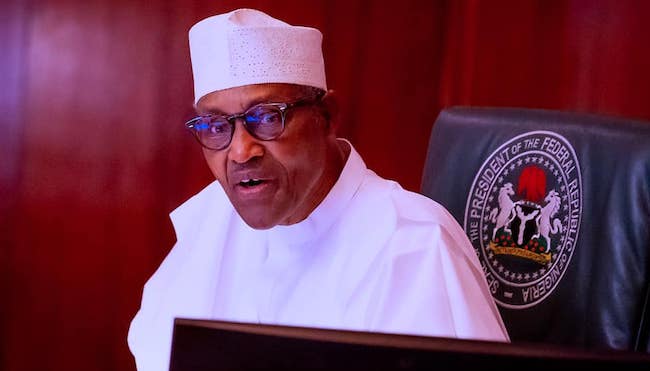 President Muhammadu Buhari has reiterated his position on not interfering with the courts’ decision either or not to release the detained leader of the proscribed Igbo separatist group, Indigenous People of Biafra (IPOB), Nnamdi Kanu.

Buhari once again confirmed his non interference stance in the country’s judicial process at a meeting on Friday with the Igbo leaders as he rounded off his two-day state visit to Ebonyi State at the Government House in Abakaliki, the state capital.

In a statement issued on behalf of the President by his Special Assistant on Media and Publicity, Femi Adesina, the President told the Igbo leaders that he would not succumb to their demands and order the release of Kanu, but would allow competent courts to take a decision whether to release him or not.

At the meeting, the Igbo leaders comprising of traditional, religious and political leaders, had reportedly appealed to Buhari order the release of Kanu as a panacea to sustainable peace in the South-East region but their request was rebuffed by the President, according to Adesina.

Part of the Presidency statement reads:

President Muhammadu Buhari Friday in Abakiliki pledged that the Federal Government would deploy its strength to protect innocent and hardworking Nigerians from terrorists and those causing break down of law and order in the South East region.

Speaking at a meeting with South-East leaders, during his two-day State visit to Ebonyi, the president expressed concern over the deteriorating security situation in the region, reiterating his directive to security agencies to ‘‘flush out’’ those perpetrating violence in the land.

Responding to appeals by traditional, religious and political leaders in the region for the release of the detained leader of the outlawed Indigenous People of Biafra (IPOB), Nnamdi Kanu, the president said:

‘‘I have listened carefully to the various appeals from the elders to the traditional leaders regarding a wide range of options, and as I have said previously this matter remains in the full purview of the courts where it will be properly adjudicated.

‘‘My worry is for our hardworking and innocent civilians, for whom life is already tough and would like to earn a decent and honest living.

‘‘There are many that fit this profile and the government owes them that obligation to protect lives and property.

‘‘I will once again repeat, no one has the right to carry an AK-47, and anyone seen in any part of the country doing so and is not a law enforcement officer is a threat to our peaceful coexistence and should be treated as such.”

Related Topics:#featuredBuhariipobnnamdi kanu
Up Next