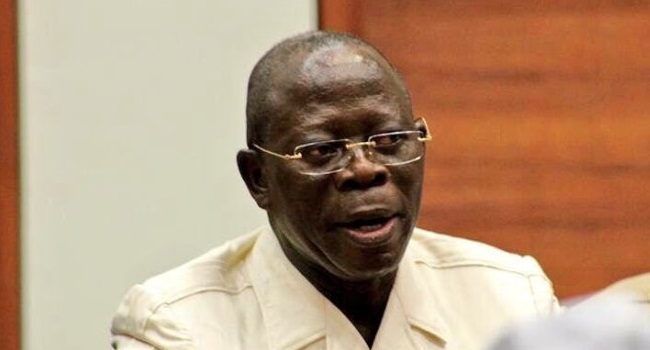 Moves by a faction of the All Progressives Congress (APC) in Edo State loyal to Governor Godwin Obaseki to sack Adams Oshiomhole as national chairman of the party has begun to yield results.

This is as a High Court of the Federal Capital Territory, Jabi, Abuja, on Wednesday, ordered Oshiomhole to temporarily step aside as the APC national chairman.

Justice Danlami Senchi, who gave the order while ruling on the application for interlocutory injunction against the party, ordered the ex-Edo State governor to remain on suspension pending the determination of the main suit.

The court held that the party wrongfully continued to retain Oshiomhole as its National Chairman while he is under suspension as a member of the party.

He, therefore, ordered the ex-labour leader to stop parading himself as the National Chairman of the APC and directed the party to cease acknowledging him in that regard.

The judge also ordered the party to deny him access to the party secretariat.

The APC had been embroiled in a protracted crisis in the last two years.

Ahead of the 2019 general election several party stalwarts including former Ogun and Imo State governor, Ibikunle Amosun and Rochas Okorocha were suspended for anti-party activities.

Some members of the party’s National Executive Committee had also demanded the ex-governor’s removal as APC chairman over his leadership style.

Oshiomhole is also involved in a personal feud with Governor Obaseki over control of the party machinery in Edo State.