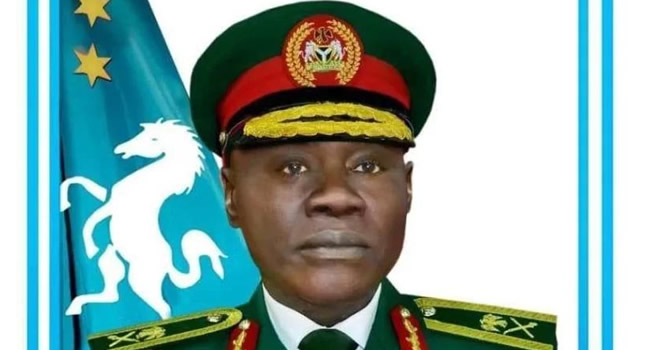 The Senate on Tuesday confirmed the appointment of Major General Farouk Yahaya as the new Chief of Army Staff (COAS).

This followed his appointment by President Muhammadu Buhari after the death of Lieutenant General Attahiru Ibrahim in a plane crash on May 21, 2021.

The confirmation comes after the consideration and adoption of the report of the Joint Committee on Defence and Army, led by senators Aliyu Wamakko and Ali Ndume.

The Chairman of the Joint Committee, Aliyu Wamakko (APC, Sokoto North), in his presentation, said the Committee was satisfied with the comprehensive and robust nature of the engagement and interactions with the nominee during the screening exercise.

According to Wamakko, Faruk’s nomination was in line with section 217 of the 1999 Constitution as amended and in accordance with the provision of sections 18(1) of the Armed Forces Act, Cap A20 Law of the Federation of Nigeria 2004.

He also disclosed that the Committee did not receive any petitions on the nominee, as he was cleared by the Department of State Service (DSS).

The lawmaker also said that during the screening exercise, “the nominee’s knowledge of the strategic capabilities of the Army was exhaustive and impressive.”

“He showed a clear knowledge of the Army with apt for a Chief of Army Staff. Despite the Army being the largest of the Armed Forces, the nominee was clear in his vision to encourage joint operational synergy with other services for success in all theatre of operations,” he said.

He added that Faruk underscored the need to ensure peace in the forthcoming elections, stressing that all hands must be on deck to deal with non-kinetic issues such as the settlement of Internally Displaced Persons (IDPs) from Boko Haram’s insurgency.

Giving insight into the dynamics of the challenges of the North East, Wamakko said the Chief of Army Staff disclosed to the Committee that under his command in January 2021, Nigerian troops advanced into enclaves of Shekau-led position in Alagarno forest-Timbuktu triangle axis.

Also, Wamakko explained that the Committee during an interaction with the nominee recognised the current security challenges confronting the nation, noting that due to the nature of the appointment as part of the country’s security apparatus, the Committee decided to do the screening in a closed session after the preliminaries.

“I want to appeal to the Senate, to expeditiously approve this confirmation so that the Chief of Army Staff be decorated accordingly to enable him start some of the jobs he cannot do now because he is still in acting capacity,” Wamakko added.

Buhari had, earlier in the month, asked the Red Chamber to confirm Yahaya, who was appointed after the demise of former Chief of Army Staff, Lt. General Ibrahim Attahiru.

Attahiru had died in a plane crash near the Kaduna International Airport last month.

Before his appointment, Yahaya was the General Officer Commanding Division 1 of the Nigerian Army and Theatre Commander of the Counter Terrorism, Counter Insurgency military outfit in the North East code named Operation HADIN KAI.

Buhari appoints Malami, others in dialogue with Twitter over suspension