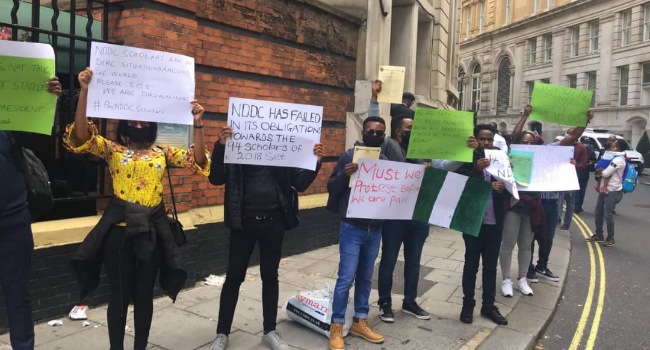 Nigerian students under the scholarship scheme of the Niger Delta Development Commission (NDDC) on Wednesday protested at the Nigerian High Commission in London.

They said they were protesting the non-payment of their fees by the interventionist agency, even after several entreaties were made to officials of the Commission.

The stranded students who carried different placards urging for payment of their entitlements, said they were at the High Commission to draw the attention of the President, Muhammadu Buhari to their plight.

They lamented, that even after the president had earlier directed the NDDC to ensure that the issues were speedily addressed, they were yet to be paid.

According to them, the non payment of their entitlements had caused so much embarrassment, and hardship for them.

It would be recalled that after an earlier protest by the students in London, President Buhari had directed the Minister of Niger Delta Affairs, Senator Godswill Akpabio, to ensure that the students get their entitlements.

Following the presidential directive, spokesperson for the NDDC, Charles Odili had said scholars of the Commission, who are facing hardships abroad because of the non-remittance of their fees and stipends, would be paid by the end of that week, adding that the delay in the remittance of the fees was caused by the sudden death of Chief Ibanga Etang, the then Acting Executive Director, Finance and Administration (EDFA), of the Commission in May.

However, a number of the protesting students told Ripples Nigeria that this was yet to be done, hence they had to take further action to draw attention to their plight.

They said the commission, for whatever reason had embarked on selective payment and favouritism in dealing with them.

“They paid students for 2016 and 2019 batches, and skipped those in between. We don’t know what their reasons are”, one student said, on condition of anonymity.

Another student who revealed that about 95 of them were affected, said, “it’s not just us. We learnt from some of our colleagues in Malaysia, Holland, Canada and others who are also on the NDDC scholarship, that they have also not been paid.

They lamented that the non payment of the Tuition fees, upkeep and Take-off grant had exposed them to a lot of hardships.

“Some of us had to use personal resources, and some had to borrow funds to process their travel documents, visa fees and tickets as the commission said they would pay us our take-off grants, which was to take care of that, later.

“As we speak, they have not paid. Some are now in debt. And one student has had to leave the country. She had bought her ticket to return to Nigeria, but could not because of the covid-19 lockdown”, another student stated.

They also noted that their various schools were requesting payment, and that appeals and emails had been sent to the NDDC to no avail, even as they lamented, that Akpabio had referred to them as miscreants posing as NDDC scholarship students.

The protesting students thereafter presented a letter for the attention of President Buhari detailing their plights, which was handed over to an official of the High Commission, who assured them it would be delivered to the appropriate quarters.