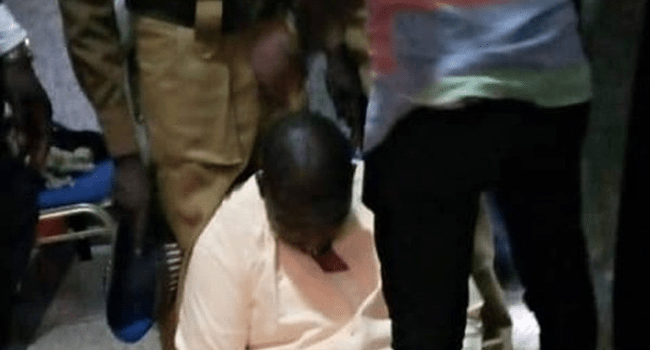 Former Chairman of the defunct Pension Reform Task Team, Abdulrasheed Maina has just collapsed in court during his trial.

The Federal Government is prosecuting Mr Maina in a 12-count charge of alleged money laundering to a tune of N2 billion before a Federal High Court sitting in Abuja.

The fugitive ex-pension boss collapsed at exactly 10:05 am when his counsel, Anayo Adibe was making submissions before Justice Okon Abang handling his trial.

Before the collapse of the former pension boss, his counsel was praying the court for an adjournment to enable him get record of the proceedings of the court to enable him prepare for the no case submission he intends to file on behalf of his client.

The court had to rise abruptly to enable officials of the Correctional Service and relations of Mr Maina to attend to him.

Mr Maina had jumped bail and fled to the Republic of Niger but was extradited to Nigeria last Thursday about two weeks after the court revoked his bail, ordered his arrest, and directed that his trial would proceed in his absence.

Related Topics:MainaMaina trial
Up Next