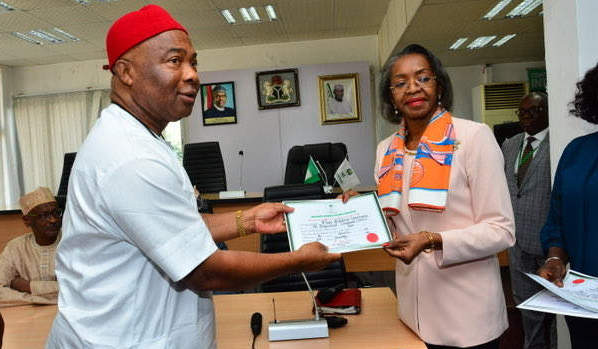 The Independent National Electoral Commission (INEC) has given a Certificate of Return to Senator Hope Uzodinma as Imo State governor-elect.

In a statement earlier released by the Chief Press Secretary to INEC National Chairman, Rotimi Oyekanmi, the commission had said it would not award Certificate of Return to Uzodinma until the Supreme Court served it with the enrolled order of the judgment declaring Uzodinma as the governor of Imo State.

But the commission, later on Wednesday, awarded the Certificate of Return to the All Progressives Congress (APC) governor-elect.

The apex court sacked the former Governor of Imo State, Emeka Ihedioha of the Peoples Democratic Party (PDP) on Tuesday and ordered INEC to issue a Certificate of Return to Uzodinma as the duly elected governor of Imo State during the last general elections.