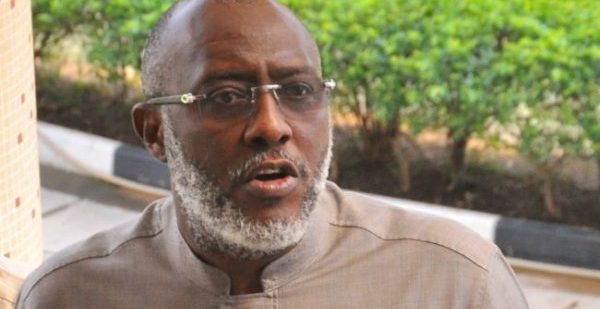 Justice Okon Abang, who is presiding over the case of alleged fraud involving former national publicity secretary of the Peoples Democratic Party (PDP), Chief Olisa Metuh, has ruled on him being tried in absentia.

The Economic and Financial Crimes Commission (EFCC) had prayed the Federal High Court in Abuja, presided over by Abang, to grant that Metuh’s trial continue in his absence.

The EFCC made the application after Metuh fell and collapsed during his trial in court on Monday.

Both the EFCC and Abang, had suggested that Metuh feigned the fall and collapsed as a strategy to continue to delay his trial.

According to Abang, Metuh deliberately fell down and disrupted proceedings by whispering loundly in the open court and groaning intermittently, “giving the impression that he was in serious pain”.

He said, “The 1st defendant has no right to hold this court to ransom by doing things or taking steps deliberately intended to scuttle his trial.

“The 1st defendant has repeatedly made the court of law look like an accident scene. This conduct should not be allowed in the temple of justice.”

The judge further said that Metuh had since April 2016, when EFCC closed its case, repeatedly “erected several road blocks aimed at frustrating this trial”.

He added, “In a bid to dismantle those road blocks, the court was accused of being biased and conducting unfair trial. However, this court will stand its ground and always do what is right,” he said.

Also accusing Metuh of ignoring a humane disposition of the court” by insisting on entering the dock, Abang said that Metuh’s action amounted to gross misconduct and wilful disobedience to the authority of the court.

He said as he invoked the provision of section 266 of the Administration of Criminal Justice Act, 2015, “I do not think that further hearing of this case in the absence of 1st defendant will in any way affect his right to fair hearing under section 36 of the 1999 Constitution”.

READ ALSO : I’m building a Nigeria ‘where excellence will be rewarded and mediocrity won’t be tolerated’- Buhari

Abang, who later adjourned the case till Thursday for continuation of trial, meanwhile summoned the General Manager of Channels TV and the anchor of Sunrise Today, Maupe Ogun Yusuf, to appear before him on Friday to show cause why an order should not be made to compel them to produce an unedited video recording of May 22 edition of the program where prejudicial comments were made concerning the court proceeding.

Metuh is being prosecuted alongside his firm, Destra Investment Ltd, over alleged receiving of N400 million from the Office of the fomer National Security Adviser.