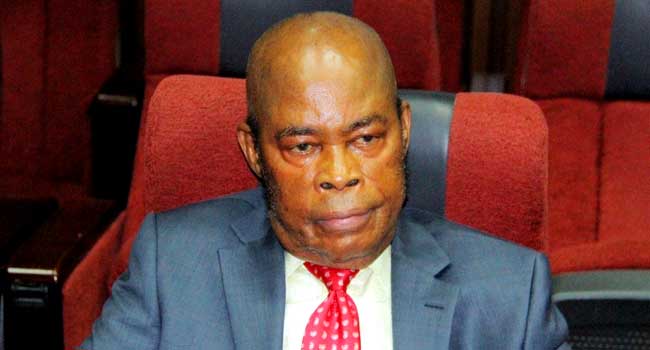 Justice Sylvester Ngwuta, one of justices of the Supreme Court accused of corruption in 2016 has returned to the apex court bench.

The Justice, who is third in seniority at the Supreme Court, made his first appearance at a sitting of the court since the early morning raid on his residence by operatives of the Department of State Services (DSS) in August 2016.

Ngwuta resurfaced at Monday’s ceremony at the Supreme Court complex to mark the beginning of the new legal year. Thirty-eight lawyers are to be conferred with the rank of Senior Advocates of Nigeria at the ceremony.

Read also: After threats of dragging them before Buhari, Service Chiefs appear before Gbajabiamila’s House of Reps

At the ceremony, Justice Ngwuta was seen sitting next to Chief Justice of Nigeria, Justice Tanko Muhammad, and Justice Bode Rhodes-Vivour, who are the first and second in order of seniority.

It would be recalled that the homes of Justice Ngwuta and some other judges were raided by operatives of the DSS in August 2016. They were subsequently asked to step down from the bench pending the conclusion of the criminal trial against him.

Though some of the judges were later recalled, Justice Ngwuta was subsequently charged with corruption and money laundering before the Federal High Court in Abuja, and with assets declaration breaches before the Code of Conduct Tribunal.

The two cases were dismissed in 2018 following a Court of Appeal verdict which prohibited the trial of a serving judge without being first disciplined by the National Judicial Council.