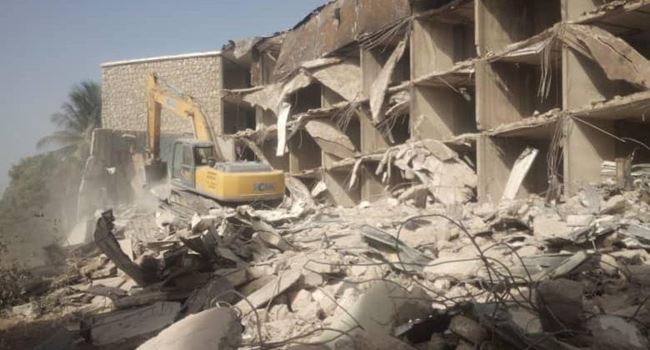 The Kaduna State government has been stopped from demolishing Durbar hotel belonging to the family of late military Head of State, General Sani Abacha.

The order was handed down on Tuesday by a Kaduna State High Court, while granting an ex-parte motion brought before it by a lawyer, Reuben Atabor.

The hotel has been the subject of litigation between the Federal Government and the family of the late Head of the State since 2001. The family has reportedly won both at the High court and Appeal Court, a final appeal is said to be pending before the Supreme Court.

It would be recalled that the Kaduna State Urban and Property Development Agency, on Wednesday night demolished part of the hotel.

Atabor, in his motion ex-partner, prayed the court for an order of interim injunction restraining el-Rufai and agencies of the state government from demolishing, taking over, or tampering with the property.

It further prayed the court for an interim injunction restraining el-Rufai and agencies of the state government from further trespassing on the property pending the determination of the motion on notice.

“I grant an order restraining the defendants from taking over the property in issue and from further tampering with same or trespassing on same or developing or assigning same pending the hearing and determination of the motion on notice,” she stated in the order, while adjourning the case till February 4.