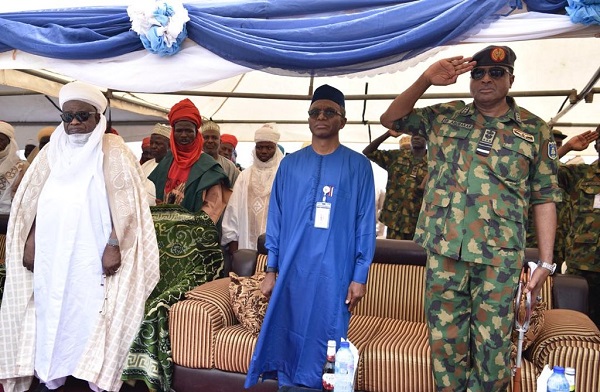 As part of efforts to end the increasing activities of bandits and kidnappers terrorising the area, the Nigerian Air Force (NAF) on Saturday inaugurated 271 Detachment in Birnin Gwari, Kaduna State.

Speaking at the occasion, El-Rufai expressed confidence in NAF, stating that it is “boosting security operations and developing even more effective strategies to end this menace.

“The establishment of the 271 NAF Detachment in Birnin Gwari is therefore, timely as it will further boost the ongoing Operation DIRAN MIKIYA, Operation SHARAN DAJI and play a very crucial role in restoring and maintaining the peace in all affected areas.

The governor also appealed to the Chief of Air Staff (CAS), Air Marshal Sadique Abubakar, to deploy Special NAF Forces along the dreaded Kaduna-Abuja road and Kajuru Local Government Areas of the state which are notorious for insecurity.

He further called on the authorities of the NAF for security clearance for use of the drones, which the state government acquired through the assistance of NAF and were commissioned by President Muhammadu Buhari on February 27th 2019, but are not fully operational due to the necessary clearance that is required by the security agencies of which the Air Force is central.

“We are hereby requesting the Chief of the Air Staff to kindly look into this matter so that the drones which will be used by his officers and men will start flying and provide other intelligence and support to security agencies,” he said.

He commended the leadership of the Nigerian Air Force for instituting the necessary infrastructure to ensure that the current security challenges facing the country are tackled.

CAS, Air Marshal Abubakar, on his part said NAF is committed to seeing that the territorial integrity of the country is preserved.

He said NAF is currently involved in several internal security operations one of which is “Operation DIRAN MIKIYA,” which according to him, is intended to neutralise and flush out bandits and kidnappers as well as cattle rustlers operating in the North-west region.

He said the 271 NAF Detachment was established as a blocking force for troops involved in Operation DIRAN MIKIYA and SHARAN DAJI.

“The NAF is committed to seeing that the territorial integrity of our dear country is preserved as this is the only country we can call our own.

“It is our desire, therefore, to ensure that the menace of terrorism, kidnapping, cattle rustling and banditry are curtailed, if not completely eradicated,” he said.

According to him, the commissioning of 271 NAF Detachment Birnin Gwari is a testimony of the NAF commitment to the fight against insurgency and banditry in Nigeria.

“Let me once again, reassure Nigerians of the firm dedication of the NAF to the fight against terrorism and all forms of criminality in Nigeria,” he said.