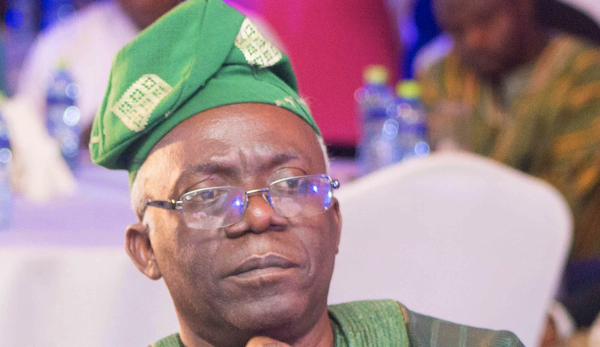 A Senior Advocate of Nigeria, Femi Falana, on Sunday described as malicious the fresh terrorism charge filed against the leader of the Islamic Movement of Nigeria, Sheikh Ibrahim El-Zakzaky and his wife, Zeenat, by Kaduna State government.

The rights activist stated this in a statement titled: “New terrorism charge was hurriedly filed by Kaduna State Government to frustrate the release of Malam Ibrahim El-Zakyzaky and Mallama Zeenat from prison.”

He said the government filed the charges in anticipation that the couple’s no case submission filed at the Kaduna State High Court would succeed.

Falana added that the move was part of the Kaduna State government’s plot to frustrate the release of El-Zakzaky and his wife from prison.

Justice Gideon Kurada of the Kaduna State High Court had last Wednesday discharged the couple on an eight-count charge of culpable homicide, disruption of public peace and unlawful assembly among others levelled against them by the state government.

The government accused El-Zakzaky and his wife of being responsible for the death of a soldier during the Shiites December 2015 rally in Zaria.

Dissatisfied with the court’s ruling, the government filed fresh terrorism charges against the couple at the Federal High Court, Kaduna, a few days later.

The lawyer said: “It has been reported in the media that the Kaduna State Government filed a new charge of terrorism and treasonable felony against Mallam Ibrahim Elzakzaky and his wife, Mallama Zeenat Elzakzaky after the dismissal of the eight-count charge of conspiracy and abetment of culpable homicide by the Kaduna State High Court.

“But contrary to such reports the new charge was hurriedly filed in the Federal High Court holding at Kaduna on Tuesday, 26th July in a desperate bid by the Kaduna State Government to frustrate the release of the defendants from further incarceration. In other words, the new charge was maliciously filed when the Kaduna State Government anticipated that the ruling fixed for July 28 in respect our no case submission would succeed.

“As soon as the new charge was filed the Bailiff of the Federal High Court was commanded to rush to the Kaduna Correctional Centre to serve the same on the defendants. But the defendants refused to accept service of the charge and directed the Bailiff to serve it on them through their counsel.

“But for reasons best known to the Kaduna State Government, the charge was not served on the defence counsel. However, on July 28 the trial judge, Honourable Justice Gideon Kurada refused to be intimidated by the forces of oppression as he displayed exceptional courage and judicial independence.

“His Lordship dismissed the eight-count charge on the ground that it was filed under a law enacted in 2017 by the Kaduna State Government for offences that were alleged to have been committed in 2015. Alternatively, the learned trial judge examined the oral testimony of the 15 witnesses called by the prosecution, upheld the no-case submission of the defence and discharged the defendants.

“In apparent disregard of the epochal judgment of the Honourable Justice Gideon Kurada the Kaduna State Government seeks to subject the defendants to trial under the Terrorism Prevention Act enacted in 2011 for offences that were committed as far back as 2008. But since the Kaduna State Government is not sure that the defendants would be convicted for terrorism, the Director of Public Prosecution, Mr. Bayero has announced that an appeal would be filed at the Court of Appeal against the Ruling of the Honourable Justice Gideon Kurada.

“No doubt, the new charge constitutes the worst abuse of the process of the Federal High Court. Once the case charge is served on the defence we shall not hesitate to file the necessary application for the immediate termination of the prosecutorial charade.

“In view of the foregoing, we wish to state, without any fear of contradiction, that the filing of the new charge of terrorism and treasonable felony by the Kaduna State Government has no effect whatsoever on the valid and subsisting order of the Honourable Justice Gideon Kudura for the unconditional release of the defendants from prison custody.”