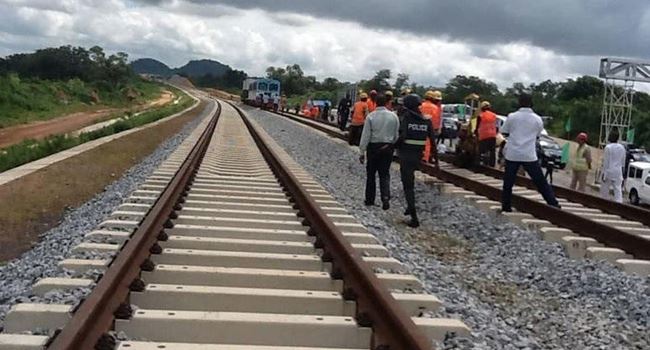 The Kano-Maradi (Niger Repiblicc) Rail Project has been the subject of discourse amongst political analysts with a majority being skeptical about the intention of the Federal Government to construct a massive infrastructural project into the Niger Republic, considering the two countries are not major trading partners.

Responding to criticisms about the project in November 2020, the Minister of Transportation, Rotimi Amaechi said, “We are tired of giving this explanation. We do not have wives from Niger Republic. The first time I was in Niger Republic was about three weeks ago, to ask the government to give us right of way and where we can build warehouses for these businesses.”

In the same vein, President Muhammadu Buhari expoused the importance of such a crucial project during the inauguration ceremony on Tuesday, February 9.

Buhari said, “the Kano – Maradi rail line has been identified as a viable line that will significantly enhance the movement of passengers and freight to the hinterland, especially raw materials from both agricultural and mineral resources for our industries. The connection to Niger Republic through rail will also foster Trans-Sahara trade and contribute to the expected gains in the African Continental Free Trade Area Agreement.”

Nonetheless, analysts have expressed concern over long term costs and benefits associated with the Kano-Maradi project.

The Federal Government had signed a Memorandum of Understanding (MOU) with a multinational engineering & construction firm, Mota-Engil Group, for the construction of the Kano-Maradi standard gauge railway lines estimated to cost a whopping sum of US$1.96 billion.

This proposed project is coming onboard despite several criticisms from the public about its economic feasibility amid other critical infrastructural issues that are yet to be resolved within the country and a dearth of funds.

In September 2020, the Federal Executive Council (FEC) approved the award of contract for the development of the project.

The standard gauge railway line is expected to pass through three states namely Kano, Katsina, and Jigawa in the country to Maradi in the Niger Republic.

The Kano-Maradi standard gauge line according to the Minister of Transport, Rotimi Amaechi is aimed at facilitating bilateral trade to position the country to become an economic hub for Niger.

The rail line is also expected to help the country compete favourably with other coastal countries in West Africa in servicing the landlocked countries around Nigeria.

The 284-kilometre line will run from Kano to Maradi in the Niger Republic, passing through Jibia in Katsina and Dutse in Jigawa.

Information from public documents revealed that the project will take a completion period of three to four years and be arranged under a 14-year buyer credit and long-term commercial loans.

Secondly, questions have been asked on the rationale in constructing a rail line 248km long, just so 55km of it can be used to transport crude oil from Maradi to a refinery in Jibia when a pipeline would do even better?

AfCFTA, which Nigeria almost didn’t join, recommends the development of multiple transportation modes across international borders in order to grow trade and industry among member states.

The decision on Kano-Maradi predated Nigeria’s accession to AfCFTA, so the latter couldn’t have been the catalyst for the former.

The agribusiness potential of that swathe of the country has long been clear to both government planners and business groups; witness the establishment of sugar industry (Bachita) and paper mill (Jebba) in the First Republic.

The LAKAJI Seminar and the USAID-funded studies all testified to that, but did not place Kano-Maradi above other projects in the pipeline.

The Kano-Maradi rail line project owes life to the tendency that there must be investment opportunities in the railway sector whose effect and impact on the economy and the polity would be greater and more immediate.

Related Topics:Kano-Niger Republic
Up Next