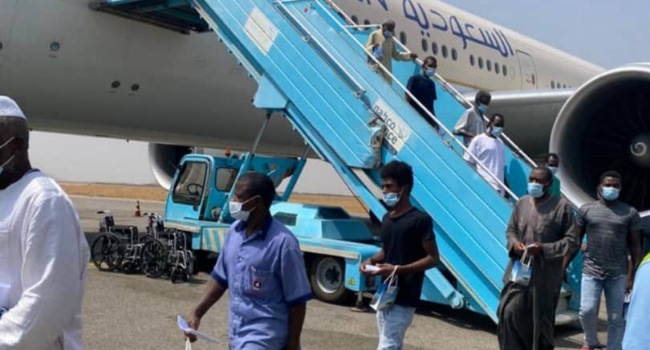 Kano State Government on Tuesday, received no fewer than 200 Saudi Arabia returnees from the Federal Government.

Director-General of Kano Investment Promotion Agency and Diaspora, Hajiya Hama Aware who received the returnees expressed appreciation to the Federal Government and Nigeria Diaspora Commission (NIDCOM) for their support.

Ms Aware, who is also Focal Person of NIDCOM to Kano said over 1,000 people have been returned to the state.

“We had more than 1,000 Kano citizens that have returned from Saudi Arabia; Kano had the largest number of returnees among others currently with over 310 citizens.

“So far, some of them have left, but we were here on Saturday, Feb. 6, to take their data.

“We have over 150 Kano citizens that are still in the camp and we are here with vehicles provided by the Kano government to carry our citizens back to the state,” she said.

She mentioned that necessary measures had been deployed by the state government to support the returnees to arrive home safely and also sensitise them on illegal migration.

Meanwhile, Ambassador Bolaji Akinremi, the Director of Consular and Legal Department, Federal Ministry of Foreign Affairs, who delivered the Saudi Arabia returnees in Abuja, said the exercise started on January 28, 2021.

He explained that the returnees would be handed over to their respective states after checking their Covid-19 status.