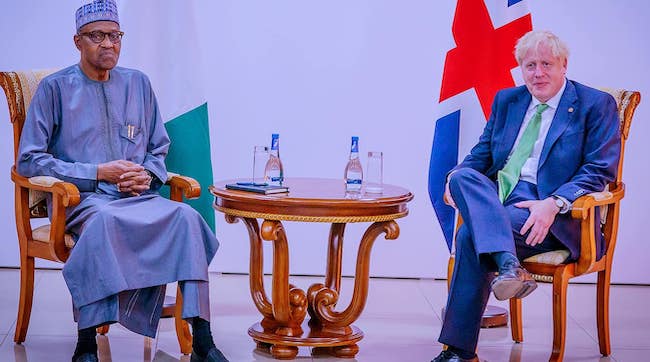 President Muhammadu Buhari on Thursday rejected the Indigenous People of Biafra (IPOB)’s allegation of the harsh treatment of its detained leader, Nnamdi Kanu, by the Federal Government.

Kanu, who was brought back to the country on June 27 last year, is currently standing trial for alleged treasonable felony at the Federal High Court, Abuja.

The separatist group has continued to accuse the Department of State Service (DSS) of subjecting the activist to torture and other inhuman treatments in custody.

Buhari, who made the clarification during a meeting with the British Prime Minister, Boris Johnson, in Kigali, Rwanda, accused the IPOB leader of making uncomplimentary comments against Nigerians while staying in Britain.

The President denied the allegation of interference in the case, saying the court has the final decision on the matter.

He said: “Nnamdi Kanu felt very safe in Britain, and said awful things against Nigeria. We eventually got him when he stepped out of the United Kingdom, and we sent him to court.

“Let him defend all he had said there. His lawyers have access to him. Remember he jumped bail before, how are we sure he wouldn’t do it again, if he is granted bail?”

President Buhari had last year rejected the South-East leaders’ demand for an unconditional release of the IPOB leader and asked him to defend himself in court.

He repeated the statement during a chat with journalists in Abuja earlier this year.