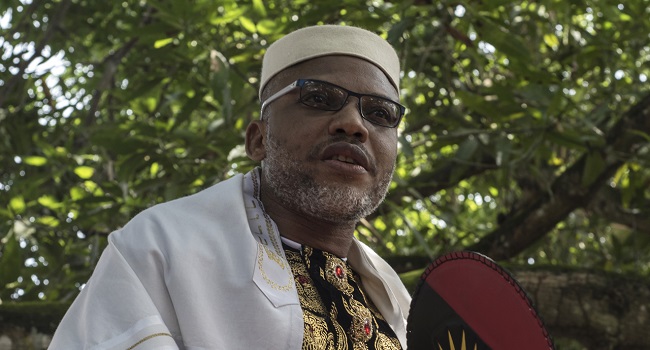 The Human Rights Writers Association of Nigeria (HURIWA) has warned the Federal Government against conducting the trial of Nnamdi Kanu, leader of the Indigenous People of Biafra (IPOB) secretly.

This was contained in a statement issued on Friday by the HURIWA National Coordinator, Emmanuel Onwubiko, who said, “This may escalate the security situation in the South East because most people will see this as not being transparent, open and justifiably carried out.”

During the week, the Federal High Court issued new Practice Directions on the trial of terrorism-related matters in the country.

Terrorism-related cases, like as the one involving Nnamdi Kanu, would henceforth be tried in secret.

Media coverage may be forbidden unless the Chief Judge of the Court grants permission.

The Practice Directions were issued by Justice John Terhemba Tsoho, the Chief Judge of the Court, in the execution of his constitutional powers as entrenched in section 254 of the Constitution of the Federal Republic of Nigeria 1999 (as amended) and all other powers permitting him.

HURIWA cautioned that this decision will exacerbate the security situation in the South East, adding that the Federal Government took this step because they knew they had nothing against the IPOB leader.

In its statement, HURIWA said, “Secret trial for the leader of the now proscribed Indigenous People of Biafra (IPOB) after he was abducted forcefully from Kenya by Nigeria’s secret services in collaboration with their Kenyan counterparts, after being subjected to horrendous ordeals and illegal rendition, which offends relevant international humanitarian laws, is unconstitutional, primitive, illegal and obnoxious.

“It is as if Nigeria is back to the days of military tribunal whereby citizens were simply chopped off the streets and made to face organised trial with a predetermined outcome.

“The decision on the Nnamdi Kanu’s case is totally unlawful and irregular. If the government believes it has a case against him, which is very doubtful, why is the government afraid of the light and has chosen to try him in the dark?

“This may escalate the security situation in the South East because most people will see this as not being transparent, open, and justifiably carried out.

“Whatever outcome from such a secret trial is ab initio null, void, and of no moment.

“We in HURIWA reject this appalling demolition of judicial transparency by the President Muhammadu Buhari-led administration. This will adversely damage constitutional democracy.”

Related Topics:#featuredHURIWAinsecuritykanunnamdi kanu
Up Next